Race held in memory of barber 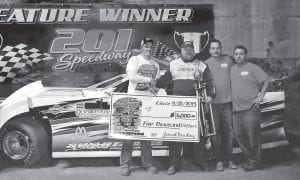 Driver Jackie Boggs, second from left, is congratulated by track owner Jarrod Breeding, left, of Isom, after winning the 4th Annual Roger Breeding Memorial Race, held this year at Breeding’s 201 Speedway in Sitka, Ky., in Johnson County. Roger Breeding was a racing fan who had operated a popular barber shop at Isom for more than 30 years before he died unexpectedly in April 2008 at age 59. Also pictured are track promoter Tony Sturgill and David “Tiny” Caudill, who was a son-in-law of Roger Breeding.