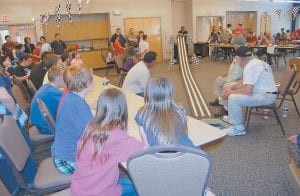 Above, a crowd looked on as Jimmy Craft, of Ice, who served as offical starter, attached a wheel to a Pinewood Derby-style car before it raced in the Awana Grand Prix at the Letcher County Extension Office in Whitesburg on April 29. Below, cars and trucks were lined up on the judge’s table at the Letcher County Extension Office on April 29. Children who participate in Awana programs at Colson and Premium Baptist churches assembled cars to race in the Awana Clubs event. (Photos by Sally Barto) 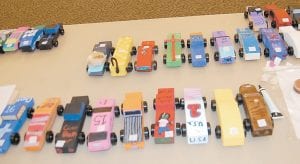