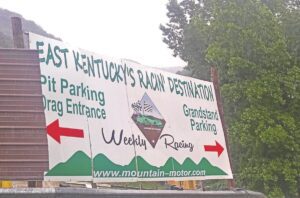 The entrance to Mountain Motorsports Park at Isom. Track officials say they have hired a private company to provide security at the dirt racing track after an incident there last weekend. (Photo by Sam Adams)

Mountain Motorsports Park says it has hired a private security company after a track employee was charged with endangerment after pulling a gun on a man during an altercation.

The incident happened Friday night after a driver crashed during a “young guns” race.

According to Kentucky State Police, when the car wrecked, Ryan Prater, a relative of the driver, jumped the wall that separates the track from spectators to check on the driver. Police say a track official then tried to make Prater leave the track, but he refused.

“The racetrack employee went back to his truck and got a handgun,” KSP Trooper Matt Gayheart said.

A citation filed in the case says troopers were told by Barry Proffitt, who is one of the track’s employees, that “four to five track employees arrived and attempted to pull Prater off the track. A physical altercation occurred between Prater and Billy Morris, which resulted in Prater being transported by EMS to Whitesburg ARH for an ankle injury sustained in the altercation.”

The citation goes on to say that Prater’s fiancée said Morris pulled the gun out and pointed it at Prater before the fight, and she showed the trooper a video of the incident on her phone.

“I observed Morris reach behind the right side of his back and pull out a firearm,” Trooper Tyler Smith wrote. “Morris then pointed the firearm toward Prater who was standing a couple feet away. At that time, Prater put his hands in the air. The video continued and showed Prater and Morris in a physical altercation fighting over the firearm.”

Morris was in the back of an ambulance when KSP arrived. According to the citation, he told police Prater had threatened him and he had gone back to the truck to get his gun, then went back to where Prater was.

“Morris advised me that once a verbal argument started again, he pulled the firearm out and pointed it at Prater,” Smith wrote in the citation. “Morris stated that is when Prater and himself got into a physical altercation.”

Morris was arrested and charged with first-degree wanton endangerment, a felony. He was taken to the Letcher County Jail and released the same night after Proffitt signed a surety bond.

A shaky cell phone video of the incident posted by a spectator online shows two men facing each other on the edge of the dirt racetrack as a race car disappears from the frame. The man facing the camera has his hands up when a woman appears to reach across the wall toward the man with his back to the camera. The video shakes and when it returns in focus, one man is dragging the other to the ground and is then on top of the other man striking him repeatedly with his fists as the woman jumps over the wall and tries to pull him off. An all-terrain vehicle speeds up to the fight and the rider and two other men begin pulling at the man on top.

The racetrack posted a statement about the incident on its Facebook page.

“We at Mountain Motorsports Park do not and will not condone such behavior as last night. Things escalate quickly and a lot was out of our control but, it is in our control now. Each person involved will never be allowed in the pit area again. The track will not open the gates again until full security is hired,” the statement says. “It is our goal to provide fun family entertainment for the people of eastern Kentucky. Anyone that hinders this is not welcome and will be removed from the property. We want to thank the Kentucky State Police and all first responders involved for their support and managing the situation exactly as they should. We will also not tolerate social media harassment and degradement (sic); you will be blocked and banned. Stay tuned for further updates.”

Another post about seven hours later says the track has hired a security company. The company, which operates armed and unarmed security, is run by the current Pike County sheriff and his chief deputy.