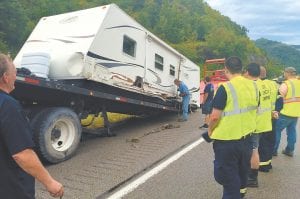 — A wreck in Letcher County last week ruined a planned NASCAR race outing to Tennessee for Kathy and Kelly Jefferson of Prestonsburg. The couple escaped injury in a crash on U.S. 23 near Jenkins, but their camper was heavily damaged. Emergency responders at the scene said Kevin Mullins of Dorton was traveling toward Pikeville when he fell asleep at the wheel of his pickup truck and crossed the center lane. Kelly Jefferson was able to avoid a head-on collision, but Mullins’s pickup still hit the family’s camper. Mullins was treated at the scene for injuries and released. The Jeffersons and their 12-year-old daughter were on their way to Bristol Motor Speedway for the NASCAR race weekend, but had to abandon their plans and have the camper hauled back home to Floyd County instead. (Photo by Chris Anderson)