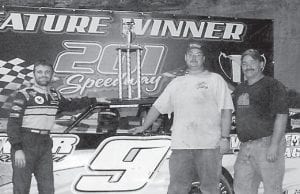 Justin King of Haymond, feature winner of the First Coal Field at 201 Speedway at Paintsville on Aug. 17, took the checkered flag three times on the same night. He was also the winner of the heat race for the Coal Field 30 and of a rescheduled feature race. His crewmembers are Randy Vanover and Eric Hurt. King expressed thanks to his parents as well as his sponsors, King’s Body Shop, Vanover’s Garage and K&R Rebuild. He said he was dedicating the win to local coal miners. Pictured are (left to right) King, Hurt and Vanover.