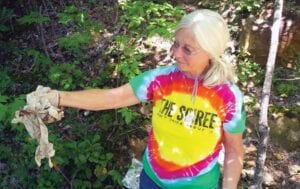 Katy Eagle holds handful of latex gloves found dumped on her property beside Little Shepherd Trail. She blames someone attending or working with the rally, and says she opposes using the trail as a racetrack. (Photo by Sam Adams)

Katy Eagle, who owns much of the top of Pine Mountain where U.S. 119 crosses at Letcher Gap, was livid when she drove up the long driveway to her cabin off Little Shepherd Trail after the Raven Rock Rally Sprint earlier this month.

Just before her driveway cuts off from an old section of the trail, multiple surgical masks, latex gloves and other litter was piled in the ditch and hanging on bushes.

Eagle’s longtime partner Jim Webb, who died in 2018, took pride in keeping the mountain clean, picking up garbage around the overlooks and his property, known as Wiley’s Last Resort. Eagle’s cabin and vintage Air Stream trailer are just across the highway from the resort with its whimsically named features such as the Walled In Pond, Faith Hill, and Lesters’ Flat, and its pink flamingoes decorating its gates.

“Jim is coming to me every night in my sleep, and he is mad,” she said.

Eagle lives in Pikeville, but spends several nights a week in her cabin on the mountaintop. She said she had no idea the rally was going held there until a cousin who was supposed to do some work for her tried to get to her cabin found an ambulance and multiple other vehicles blocking the dirt road to her driveway.

She found the garbage the next time she came to her cabin. She had already picked up some of the garbage when she decided to visit The Mountain Eagle with her complaint. A quick trip to the site revealed a small, white garbage bag that appeared to have had its contents dumped out on the roadside. A pile of latex exam gloves still lay in the ditch, and several masks were strewn around the area. Small, plastic water bottles of the kind often handed out free at public events were scattered around the ditch, up the hillside, and on the other side of the road, along with a cigarette pack and a soft drink can.

Organizers have said the trail was left in better condition that it had been before the rally, and the main trail did appear relatively clean. The trash that Eagle found was along the old section of the trail that was left without an outlet to the road when the new highway was built and the entrance of Little Shepherd Trail was moved.

So far, Eagle is the only landowner who has publicly opposed having rallies on the trail, though others in the community have. Backroads of East Kentucky is planning another one September 17 and 18.

The trail was built-in the early 1960s, and runs from Letcher Gap to Harlan. Most of the property around the trail is either publicly owned, or there are public conservation easements on it. A nonprofit that is creating a wildlife corridor the length of Pine Mountain owns part of it, the Kentucky Nature Preserves Commission owns part of it. The Hensley/Pine Mountain Wildlife Management Area abuts a large section of the trail.

The Department for Fish and Wildlife, which owns the Wildlife Management Area, did not return phone calls and an email seeking comment about the next rally, which takes place during the deer archery and crossbow season.

John Mura, a spokesman for the Department of Energy and Environment, of which the Nature Preserves Commission is a part, said the agency was unaware of the planned rally.

“ Secretar y Rebecca Goodman and Governor Andy Beshear are committed to preserving and enhancing the natural beauty of the Commonwealth, while fully encouraging the economic growth of eastern Kentucky,” Mura said. “Any type of group activity that would impact a state nature preserve would require a permit from the Office of Kentucky Nature Preserves. At this time, the office has not been contacted by the race organizers for a permit. ”

The next rally is expected to begin near the Laden Trail in Harlan County, and run along a section of the Little Shepherd Trail that passes through the Lucy Braun State Nature Preserve.