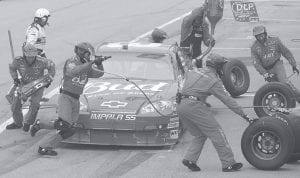 It’s been all Earnhardt all the time since he announced he was defecting from his late father’s company. Rumors swirled through the garage, false reports showed up on television and the Internet buzzed after Earnhardt said he was leaving DEI at the end of the year.

“It’s going to last until he signs a contract with somebody, which is really good,” said two-time champion Tony Stewart, who joked he could have punched somebody at Darlington Raceway last weekend and no one would have noticed.

Stewart, no stranger to the spotlight, wasn’t exaggerating.

Earnhardt seemed to be the only story at Darlington. Pay no attention to that feud between Kasey Kahne and David Stremme or the intentional bumping and banging between Stewart and Ryan Newman during the Busch race. Save a brief interruption by Hendrick Motorsports’ fourth consecutive victory, the spotlight never left Earnhardt, who finished eighth Sunday.

That’s why Earnhardt asked for a break – just a week or two to unwind.

Now, the wait begins. Even though he’ll likely have his pick of teams, figuring out his future might not be so simple.

Earnhardt wants to stay in a Chevrolet, which puts Dodge owners Ray Evernham, Chip Ganassi and Roger Penske at the bottom of the list.

Earnhardt fans everywhere would revolt if he went to one of the new Toyota teams, and none are competitive enough to entice him.

Jack Roush, the best of the Ford owners, is already over the limit with five drivers. He must figure out how to meet NASCAR’s 2009 four-car mandate before even considering adding Earnhardt.

“There are a lot of safer routes he could take,” first-year owner Bobby Ginn said. “But I hope that he would see that we try harder.”

So where does that leave Earnhardt?

He wants to win championships, and Hendrick Motorsports seems to be the place to do it. Winners of eight of the last nine races, the organization is the best in NASCAR right now. But all four of its drivers are under contract, and Hendrick isn’t looking to dump any of them.

Casey Mears, struggling through his first season, is the most expendable driver if Hendrick wanted to make room for Earnhardt. But Mears is like a son to Hendrick, is best friends with Jimmie Johnson and deserves a chance to make it in the organization.

It’s also not the most natural fit for Earnhardt.

Hendrick drivers are taught to be polished, politically correct and arrive at events in starched shirts and slacks. That could be tough for Earnhardt, whose wardrobe seems to consist of only wrinkled white Tshirts.

Gibbs has won three championships since 1990, and Earnhardt is friends with Tony Stewart and Denny Hamlin. He and Stewart have been unofficial teammates for years at restrictor-plate races, and Stewart pushed Earnhardt to his 2004 Daytona 500 victory.

But the Gibbs team has a strict family values message that makes it leery of bringing Budweiser on as a sponsor. The beer company is expected to follow Earnhardt wherever he goes.

“For us it would be hard,” said team president J.D. Gibbs. “I’m not sure if that would fit for us. Even though we really appreciate what they’re doing and they’re a great group, it’d be hard for us to do.”

That leaves RCR, where the elder Earnhardt won six of his seven championships. It’s the one team Earnhardt fans would embrace, and Junior really does care what his fans think.

Childress plans to make a run at Junior, as soon as he’s ready to listen.

RCR can offer him the No. 3, his daddy’s old car number, though Earnhardt isn’t even sure he’d even want it.

Both troubled Earnhardt, who was upset about the crush of attention it brought to Childress when he arrived in the garage last Friday morning.

“I was sort of hurt or upset or disappointed that Richard was put in the position,” Earnhardt said. “Speculation that wouldn’t make it to TV a couple years ago, these days it seems to make it there pretty easily. And I thought that TV jumped the gun, because he’s got drivers and crew members over there trying to win races and trying to do the best they can this year.

“The last thing I want to do is get in the middle and confuse their minds and start rumors over at his shop. You know how rumors move around.”

Sure do, and until Earnhardt is signed, there’s bound to be plenty of them.