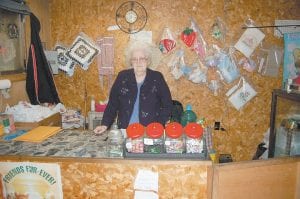 Christine Whitaker stands behind a counter at Whitaker’s Variety Store at Blackey. The rag sale is open from 8 a.m. until 3 p.m. on Tuesdays and Thursdays and from 1 until 4 p.m. on Saturdays and Sundays. (Photo by Sally Barto)

When Christine Whitaker was 34, she decided to open a rag sale in Blackey. Forty-two years later she is still offering gently-used clothing, toys and household items at extremely low prices.

“I had gone to a sale in Perry County and this lady said she was going to have to go out of business and asked if I would be interested in buying the stuff she had on hand,” said Whitaker, who was a stay-at-home mother at the time. “I thought this was something I could do and bring the boys with me and not get a sitter. It worked out real good.”

“It was a whole lot of money then,” she said.

Her husband, Charlie, who was a coal miner at the time, supported her decision and has helped her keep the business going.

“We’ve always worked together on it,” said Whitaker. “I couldn’t have done it all of these years without him. He hauls stuff for me and keeps my fire going.” 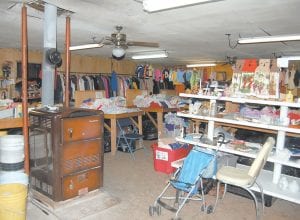 An old stove kept fired by Charlie Whitaker is located in the middle of Whitaker’s Variety Store at Mayking. Christine Whitaker has been selling gently-used clothing, toys and household items at extremely low prices for 42 years. (Photo by Sally Barto)

The original store located in Blackey burned after about 20 years. Its replacement is located about two miles below Blackey on Highway 7 in a modest wooden building with a small porch.

“One time this man came in carrying his child barefoot and said his house burned and I told him to get whatever he wanted and he said he would come back,” Whitaker said while recalling the fire. “That was on a Sunday and our building burned on that Tuesday. I worried about that because I knew they were in need of items.”

Whitaker said the busi- ness isn’t about making money, but is about helping people who are in need.

“I’ve done this over half my life,” she said. “People would bring their little children. Now those children have grown up and they bring their children.”

Whitaker said most of her customers seem appreciative, and that people often just stop by to chat.

“These are people that I have known over the years,” she said. “You can’t just go to any store, sit down and visit, can you?”

Whitaker said other people have operated rag sales in Letcher County over the years, but none have lasted as long as hers.

“ They didn’t have the patience like I do,” she said. “I don’t mind slow days. I like to crochet and read and do embroidery. I make things and sell them. If I was the type of person who got bored I would have quit a long time ago.”

Whitaker said her store continues to be successful because she and her husband are able to offer clothes at such a reasonable price.

“If they get something they can’t wear they can bring it back and swap it for something else or get their quarter back,” she said, adding that the rag sale attracts about 30 to 40 customers a week.

“In the last month I have noticed more new customers stopping by and they spread the word and more will come,” she said. “It’s from all parts of the county, and I have customers from Leatherwood in Perry County.”

Whitaker said she hopes to have operated the store for at least 50 years before she thinks of closing it.

“ That would really be something,” she said. “As long as I am able I will do it. If (my husband) gets to where he can’t, I probably won’t. I can’t do it without him.”