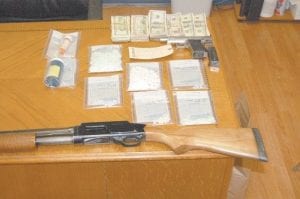 PILLS OF MANY COLORS and strengths were found in the Camp Branch home of Stanley Sexton, the Letcher County Sheriff’s Department says.

Police say they found illegal drugs, a stolen firearm and money, including more than $2,000 in quarters, when they searched a Camp Branch house last week.

Letcher County Sheriff Danny Webb said he was able to obtain a warrant to search the residence of Stanley Sexton, 57, of 7759 Kentucky Highway 931 North, after a three-month investigation indicated that Sexton was trafficking in narcotics.

Damron said $5,297 in cash was seized as well as $2,224 in quarters. A firearm that had previously been reported stolen to the sheriff’s department was also recovered during the search.

Webb said he had been receiving complaints about people trading stolen property to Sexton for drugs, noting that unlike pawn shops, drug dealers don’t have to keep records of merchandise they take in. 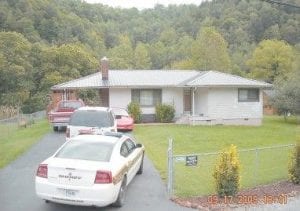 Letcher County Sheriff ‘s Department vehicles blocked the driveway to Stanley Sexton’s home at Camp Branch while a search warrant was being executed on Sept. 17. Sexton was later released from jail on bond.

Sexton was arrested Sept. 17 and charged with first-degree trafficking in a controlled substance (OxyContin). Webb said more charges are expected to be filed against Sexton, including receiving stolen property.

Sexton posted a $5,000 property bond on Sept. 18 and was released from the Letcher County Jail.

Webb, Damron, Scott Taylor, Mike Dingus and Wade Adams, all with the sheriff ‘s department, and Kentucky State Police Trooper Justin Cornett assisted with the execution of the search warrant.