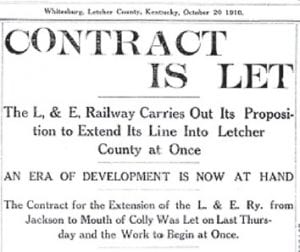 This headline appeared in the Wednesday, October 20, 1910 edition of The Mountain Eagle.

The Wednesday, October 20, 1910 edition of The Mountain Eagle carried the news that the Lexington & Eastern Railroad would immediately begin construction to extend its track from Jackson in Breathitt County to the mouth of Craft’s Colly near Whitesburg. The work would be done in five 18- mile sections.

Interestingly, the Eagle’s story made no mention of the fact the railroad track was being built to take advantage of the huge and high-quality coal seams in Letcher County. Whether the L&E Railroad didn’t use the word “coal” in its release or then-Eagle editor N.M. Webb simply overlooked it may forever remain unknown. However, it is worth noting that representatives of out-of-state land barons were still busy in eastern Kentucky securing the right to mine coal through “broad form deeds” in which local farmers who knew next to nothing about coal mining gave up claim to their mineral rights in return for a price of only pennies an acre.

“We may now expect an era of development to set in the likes of which have never been known in this county,” wrote Editor Webb. “Thousands of people will be employed in building the new of line of railroad [and] workmen of all kinds will doubtless throng the county.”

Noting that many Letcher County residents were against the railroad coming into the mountains, Webb called on his readers to “cease grumbling” and “make the very best of it.”

“Let no man, especially our farming class, get in the least excited,” Webb wrote. “Right now, screw yourself fast to the soil. Hit it hard. The farming classes are bound to prosper above everybody else if they manage their matters right.”

The 18-mile section of track reaching into Letcher included two tunnels— at Dry Fork and at Dug Hill near Whitesburg. It was built by the W.J. Oliver Construction Company, which submitted the low bid to build the Panama Canal but saw the bid awarded to the U.S. Army Corps of Engineers.