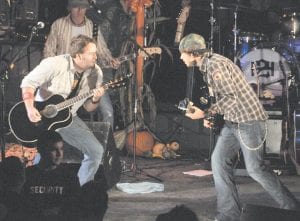 Fans didn’t seem to mind standing in gooey mud while Halfway to Hazard performed a highenergy concert for two hours at the Mountain Heritage Festival in Whitesburg Saturday night.

The country-rock duo also played a number of cover songs, including “Folsom Prison Blues” by Johnny Cash and “Tush” by ZZ Top. Tolliver, who wore a coal miner’s hat during “Folsom Prison Blues,” never let fans know he was in pain from a foot injury he suffered while playing basketball the day before. A few times he looked at his family members sitting on the side of the stage and said, “Ouch.”

Warrix tossed at least 100 guitar picks to the audience as well as several drumsticks and a sweaty shirt taken from the band’s drummer. Warrix also handed the crowd a plump pumpkin he took from a fall display decorating the stage. Warrix laughed as he picked up a large yellow gourd and was admonished by Tolliver to put it back where he got it.

“This is getting ridiculous,” Tolliver joked before Warrix autographed the gourd and tossed it to the crowd.

Tolliver said he is always amazed by the number of people who know all the words to Halfway to Hazard songs, and Saturday’s performance proved to be no different as fans sang along to the duo’s two hit singles, “Daisy” and “Devil and the Cross,” which reached No. 39 and No. 50 respectively on Billboard’s country music chart.

Fans also knew the words to the duo’s latest single, “I Know Where Heaven Is,” and to “Cold,” which includes the lyric from which the name Halfway to Hazard was taken (“… halfway to Hazard, with the rain comin’ down”).

Heavy rains that poured through most of Saturday stopped before the concert began but left a thick layer of mud over the hillside in front of the stage in an area of Whitesburg known as Mountain Heritage Village.

The charismatic duo told the crowd they had performed in Iowa on Sept. 24 and in Missouri on Sept. 25, but the show about which they were most excited was returning to eastern Kentucky, where plenty of family members were on hand to watch.

Warrix’s sister Leslie and father Lewis Warrix of Jackson sat at the back of the stage near Tolliver’s stepmother and his father, Jackie Tolliver of Hindman.

Tolliver’s mother Virginia Tolliver Long of Richmond, his sister Renee and her husband Stephen D. Combs, a former Whitesburg dentist, sat out in the crowd. Many of Tolliver’s cousins were also on hand.

Halfway to Hazard is scheduled to play a free concert at Two Keys Tavern in Lexington, near the campus of the University of Kentucky, on Oct. 2 at 10 p.m. The duo will return to eastern Kentucky the next day (Oct. 3) to perform a 9 p.m. show at the Knott County Horse Trail Ride in the community of Soft Shell, located off KY Highway 80.

Video clips featuring Tolliver and Warrix may be accessed free of charge by visiting www.themountaineagle.com.