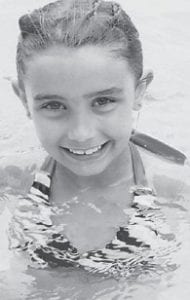 EIGHT YEARS OLD — Emily Grace Caudill celebrated her eighth birthday August 17 at home with family and friends. She is the daughter of David ‘Tiny’ and Holly Caudill of Isom. Her grandparents are Linda Breeding of Isom and the late Roger Breeding, and Gary and Katie Caudill of Blackey. She has a younger sister, Madison Layne, 4.

I hope things are going alright in your own corner of this world! I start this column with a heavy heart. As lots of you know, August 14 I lost a wonderful friend, Willamae Boggs, though I realize her husband Carl and son David have a void in their lives that will never be filled.

I am glad I had the pleasure of meeting Willamae. In the short time of our friendship we shared things that only women can, we would laugh over things together,

When I came home at night I miss reaching for the phone to talk to her, or waiting for her call to me. When she would call when I wasn’t home, she would leave a message that said, ‘Rose, this is Willamae.’ Actually I still have her last recording on my telephone answering machine.

I had the weirdest thing to happen Sunday morning as I was in my living room. Sometimes I leave the television on and don’t even know what is being shown. All at once I looked at the television as I heard the name of Willa. It was a cartoon. I feel Willamae was with me in spirit as it seemed.

I meant to share something with you and forgot to last week. As I was driving to Pikeville to see Willamae I got caught in an awful downpour. I thought I was going to have to pull over beside the road as I barely could see where I was going. When the rain stopped there was a most beautiful rainbow in the sky.

I must say it seemed like even with the sadness of knowing what I was going to face that God put a little beauty for me to see.

In the last four years I have lost several friends, my little mountain mama Alma Whitaker from the mountains, from here in Harrison my longtime friend of almost 40 years Margie Kelly, not quite a year ago my friend of 30 years Hazel Lee, two years ago my friend Vickie Power’s daughter, a young friend Kelly Payne, and now Willamae.

I don’t think I want to get close to anyone else, yet I feel my life was so blessed having each of these people touch my life through the years. There was just a special bond between Willamae and me.

Willamae told me about a program on the History Channel called ‘American Pickers’ that I enjoy. She also told me about a web site called Heart Warmers as she knew I would enjoy it.

We were looking forward to the time she was feeling better as she was planning to have Jessie Frazier bring her to my house as he went to Indiana to spend time with his daughter Cricket.

Now it seems like I neglected another friend, Gwen Huff Farmer, as her birthday was August 16. Gwen reached the young age of 81 years young. Gwen is in better health than I am, at least she keeps her feet on the ground and hasn’t taken as many falls as I have in the past year.

Gwen, I am sorry I completely forgot. Now I wonder why I did that!

I finally had my leg xrayed. There are no broken bones, however the doctor said I did a bang-up job of messing it up. I may have to go to an orthopedic doctor yet; the swelling is down but the bruising is still there and it is very painful.

No wonder there are so many drug addicts in this world. He gave me a prescription for pain pills, which I tore up. I can’t take pain pills because they make me itch and I am drowsy the next day.

Had it not been for my daughter Anna Nottingham, who is a certified medical assistant, insisting I get it checked out and my daughter Angie Wiederhold, who is a nurse, saying I could have a fracture and still be able to walk on it, I wouldn’t have gone to the doctor.

Friday night I kept my little sidekick Bennie Wiederhold. It was too hot for him to play in the yard, so when it cooled down I took him outside. As it grew dark I turned on the flashlight for him to play on the back trailer pad long after it was dark. Each time I would say ‘let’s go inside’ he would say ‘play in the yard.’ Bennie’s mother Angie doesn’t take him out enough to suit me, so I let him play as long as I could stand on my feet.

I had a nice conversation on Facebook with Aline Robinson, who is from eastern Kentucky and makes her home in Alabama. It is always nice to hear from her.

My brother Richie Hall and Wanda are still having problems with their air conditioner. I hope they get it fixed soon as I know Wanda is in misery with the hot weather.

I am thinking seriously of putting my house up for sale by next spring, either buying a small motor home or going into a one-bedroom apartment. I don’t know which way to go. I just feel I need a change and life is quickly passing through.

My sympathy goes out to the family of Charles B Mitchell, Chuck as he was called at Roxana. I was raised up with Cuma Jean, Alice Faye, Chuck and Willis Lee. I knew the younger ones too. Ray and Faye Gentry lived in the flat part of Roxana and Daddy and Mommy lived upon the hill.

Cuma Jean cut my long hair when I was 12 years old and Daddy just about beat me to death. He whipped me with his mining belt.

I talked to Ann Calihan and all is well with her family. She always has a letdown feeling when she has company and they are heading for home.

Clarence and Arlyn Halcomb attended the Halcomb reunion was held two weeks ago at Lake Cumberland. There were 72 Halcombs and friends there. All nine living children of Irv and Mary Halcomb were present. They came from Florida, Illinois, Georgia, Tennessee, Kentucky, Ohio and Indiana. Plenty of good food and good companionship was shared by everyone.

Clarence Halcomb hurt his hand and is having to take treatments to help it heal. Arlyn said their garden was good, however the peaches didn’t do very good this year as it was so a dry.

Shirley Wells is making plans to go to Mountain Heritage at Whitesburg.

Keep Sept. 25 open on your calendar for Letcher County Days in Harrison, Ohio.

Well, I am sorry for this being a short column. I am exhausted.