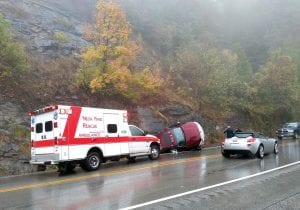 RAIN BRINGS WRECKS — The first sustained rain in more than a month brought some much-needed relief from the heat and drought, but it also caused many roads to resemble oil slicks as a built-up mix of auto fluids, tire rubber and other residue rose to the surface. There were at least seven injury and noninjury accidents between 1 p.m. and 5 p.m. Monday, keeping ambulance crews, fire departments and police scrambling. Accidents were reported on US 119 South on Pine Mountain, US 119 North at Ermine, KY 931 South at Cowan, KY 931 North at Sandlick Gap, US 23 South near Pound Gap, Crafts Colly Road near Licking Rock Branch, and on Jenkins Road in Whitesburg. Picture above, a pickup truck overturned in a deep ditch beside US 119 South across from the Cliffside Overlook after the driver lost control on the slick road. No one was injured in the last two collisions. (Sam Adams photo)

Rain Sunday night through Tuesday was far below the forecast possibility, and wasn’t enough to lift a ban on outdoor burning in Letcher County and most of eastern Kentucky.

According to Kentucky Mesonet at Western Kentucky University, the state’s official source for precipitation and climate data, Letcher County received barely more than a third of an inch of rain since Saturday night. No rain is forecast for the remainder of the workweek, though some scattered showers are possible Saturday and Saturday night.

Letcher County remains in a severe drought, with the northwestern edge of the county and a broad swath of eastern Kentucky in that same direction in an extreme drought, the National Weather Service in Jackson said.

The National Weather Service office in Jackson recorded no measurable rainfall at the Julian Carroll Airport in Jackson for 37 days, shattering the previous record dry spell of 25 days, in 1991 and 2005. There was no measurable rain from August 29 until October 4 at Jackson.

On average, it was the hottest September on record with an average temperature of 76.8 degrees, more than three degrees hotter than September 1998, which was the second hottest.

Temperatures in Letcher County are expected to increase today (Wednesday) and remain above normal until Saturday, when the high is forecast to be 68 degrees with scattered showers, and a low around 40. The remainder of October is expected to be above normal in temperature with below normal rainfall.