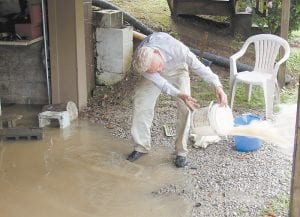 Curt Caudill used a bucket to remove water from his basement garage after heavy rains hit Redfox, near the Letcher- Knott county line, recently. While much of the rest of the nation is experiencing a damaging drought, Letcher and neighboring counties have been receiving more rainfall than usual for this time of year. (Photo by Ben Gish)

While much of the rest of the United States other parts of Kentucky are suffering through the nation’s worst drought in 25 years, Letcher County had an unusually wet July and appears headed toward an even wetter August.

Letcher County began July in near-drought conditions, 6.9 inches of rain fell before the month ended, data recorded by an automated weather and climate-monitoring station in Whitesburg shows. The same weather station operated by Kentucky Mesonet shows that Whitesburg received 3.47 inches of rain during the first seven days of August, just .12 inches below the monthly norm of 3.59 inches. Normal rainfall for July is four inches.

While Letcher County has become a muddy mess in many places and is being placed under a flash flood warning seemingly every day, much of the rest of Kentucky and the U.S. are experiencing drought conditions ranging from “exceptional” to “abnormally dry.”

The federal U.S. Drought Monitor shows nearly two-thirds of the lower 48 states are experiencing some form of drought, and the U.S. Department of Agriculture has declared more than half of the nation’s counties — nearly 1,600 in 32 states — as natural disaster areas. More than 3,000 heat records were broken over the last month. 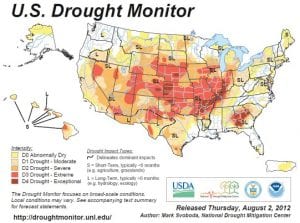 Thousands of fish are dying in the Midwest as the hot, dry summer dries up rivers and causes water temperatures to climb in some spots to nearly 100 degrees.

About 40,000 shovelnose sturgeon were killed in Iowa last week as water temperatures reached 97 degrees. Nebraska fishery officials said they’ve seen thousands of dead sturgeon, catfish, carp, and other species in the Lower Platte River, including the endangered pallid sturgeon. And biologists in Illinois said the hot weather has killed tens of thousands of large- and smallmouth bass and channel catfish and is threatening the population of the greater redhorse fish, a state-endangered species.

So many fish died in one Illinois lake that the carcasses clogged an intake screen near a power plant, lowering water levels to the point that the station had to shut down one of its generators.

“It’s something I’ve never seen in my career, and I’ve been here for more than 17 years,” said Mark Flammang, a fisheries biologist with the Iowa Department of Natural Resources. “I think what we’re mainly dealing with here are the extremely low flows and this unparalleled heat.”

• In New Orleans, the Army Corps of Engineers is working feverishly to stop salt water from threatening the city’s drinking water supply because the droughtstricken Mississippi River has gotten so low it is nearly at sea level and is allowing salt water from the Gulf of Mexico to move far inland.

• In Georgia, poultry officials say the ongoing drought that is devastating crops in the Midwest might lead to fewer chickens in stores — and much higher prices.

• In parts of Kentucky, state Department of Agriculture officials say they may be able to help farmers find forage for livestock now that many pastures and hay fields have been depleted by drought.

Anthony Richey, journey forecaster with the National Weather Service in Jackson, said the excess amount of rain Letcher County continues to receive can be explained by the thunderstorm activity forming over the Northern Plains and tracking to eastern Kentucky. He said it is a typical summertime pattern.

August 3 has been the wettest day of the month so far with 1.4 inches of rainfall recorded in Whitesburg. Letcher County Judge/Executive Jim Ward said quite a bit of flooding took place in the county on that day, including at Blair Branch, Race Track Hollow and Spring Branch near Isom, Smoot Creek and at Walter’s Branch.

Several culverts were washed out or stopped up with debris, said Ward, and at least five culverts have been replaced since last Friday. Ward said the problem arose because heavy rains came in a short period of time.

“It’s just all at once,” said Ward. “You are having a lot of rain in a 45-minute time. Nothing can handle it.”

According to Kentucky Mesonet, .83 inches of rain fell in Whitesburg on August 6. Totals were not yet available for Aug. 7.

Ward said he knows of one house located in a subdivision in Sacket Loop at Rockhouse that received flood damage.

He said he and the county road department worked Friday night, Saturday and Sunday unstopping culverts, but said work will still need to be done on some creeks.

AccuWeather is projecting more rain for Letcher County on Thursday and Friday after a rare dry day on Wednesday.