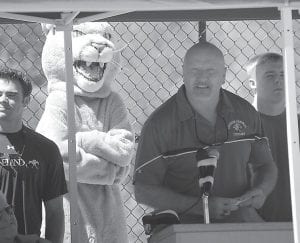 Lexington Christian Academy had won a total of three games the previous three seasons when Paul Rains was hired in 2003 as LCA’s head coach. Under the leadership of Rains, the Eagles finished with a record of 8-3 in 2003 and were district runners up. The Eagles were undefeated in regular season play in 2005 and 2006 and were backto back district champs.

In 2009, LCA won the Class A state championship.

Rains, a 1980 graduate of Williamsburg High School, was inducted into the school’s hall of fame in 2006.

Rains, a graduate of Cumberland College, began his coaching career at Johnson Central High School. He became head coach at Hazard High School in 1987. In 1992, he coached the Bulldogs in an undefeated season.

Rains won a district championship in 2002 at Madison Central.

After taking a year off from coaching LCA to a state title, Rains was hired in 2011 as head coach at Mercer County. The Titans, which had not had a winning season in three years, finished this past season with a record of 5-7. In the playoffs Mercer County beat Russell County, which was ranked sixth.

In his 23 years of coaching football, LCCHS will become the latest target for Rains to try to turn around into a winning program.

Rains will replace Mike Whitaker, who recently resigned after coaching two seasons at LCCHS. Under Whitaker, the Cougars were 7-14.

“I think at this point in my career I want to go somewhere where football is important to them,” said Rains. “I know they lost some awfully good players. Not only did they lose some good players, they lost some quality leaders last year. That’s some big shoes to fill.”

Rains said the LCCHS seniors seem to be up for the challenge.

“Some of the younger kids seem excited about what I’ve got to offer,” he said.

Rains is impressed by his new team.

“Quite a few of them came up and gave me a good firm handshake and looked me square in the eye and introduced themselves to me and told me what their name was,” he said. “That means a whole lot. That is the first start of being a man of character and that doesn’t always happen nowadays. That tells me Mom and Dad must be doing a good job at home.”

Rains said his program is built on three principles consisting of a vision of manhood, code of conduct and a higher purpose.

“We try to make sure we explain to our players what a real man is,” said Rains. “If you watch ESPN and a lot of things on T.V. today what is seen as role models really aren’t very good role models.”

Rains said he expects the football players to be the best kids in school.

“I want them to be the ones who reach out and help other students and set examples for the entire school system,” he said. “That is setting an awful high standard for all of them, but that is our goal and that is what we are going to promote the day they walk into the program.”

Rains said Cougar fans have something to look forward to this football season.

“I think they are going to love it,” he said. “Our offense is fast paced. We don’t huddle. We don’t waste any time at the line of scrimmage. We get up there and we snap it. If we are having a great night, we may run 80-90 offensive plays in a game.”

“Hopefully, they’re going to see a well disciplined football team that really loves to play the game together,” he said. “The thing I’ve already started preaching to them and I think will probably be our motto this year is all in. I want all of our players to buy in and be all in what I am teaching them this year.”