Rains result in heavy damage in parts of county 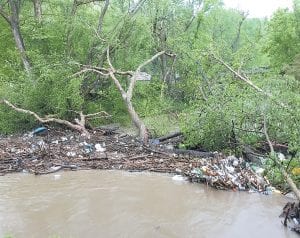 LOGJAM — Trash and other debris gathered behind fallen trees and logs to form a dam in the North Fork of the Kentucky River at Mayking, resulting in property losses to two homeowners living between Pine Creek and Cram Creek.

Cleaning out and replacing culverts, graveling roads, and labor and equipment costs are included in what Ward said is a conservative estimate.

The National Weather Service in Jackson recorded 1.14 inches of rainfall for two miles northwest of Whitesburg from 8 p.m. Saturday until 8 p.m. Sunday.

Culverts stopped up with debris were located in Sheas Fork in McRoberts, McPeeks Branch in Jenkins and Yonts Fork and Grassy Fork in Hemphill.

Ward said culverts sometimes get clogged up by brush that people have thrown in creeks.

Flooding was reported in Goose Creek, where a culvert owned by a resident was stopped up. Water got in the home of Brandon Fleming, said Ward.

A large tree fell below a state bridge at Mayking, on the North Fork of the Kentucky River between Cram Creek and Pine Creek, trapping garbage and other refuse and causing serious damage to two adjoining properties.

Ward said a county road isn’t located anywhere near the bridge. He said he spoke with the state transportation cabinet district engineer about the problem Tuesday.

“The state, in my opinion, will have to do something about it,” said Ward.

According to information gathered at the Kentucky Mesonet weather site in West Whitesburg, 1.04 inches of rain fell Sunday followed by 0.70 inches on Monday, bringing the precipitation total to 3.65 inches since April 27.

The rainfall total for April was 4.05 inches, according the weather site, which is operated by Western Kentucky University. The precipitation total for Letcher County in March was 1.95 inches, down from 4.25 inches in February but up from slightly from January’s total of 1.91 inches.