Rainstorms causing flooding in the county 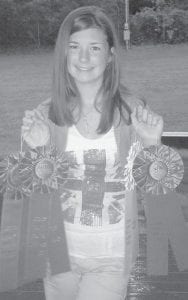 Brooke Saurer earned several ribbons last week in the Letcher County Extension Office fruit and vegetable contest. She received a blue ribbon for each category: tomato, banana pepper, and squash, and earned a white ribbon for another squash. She will also compete in the Kentucky State Fair 4-H program in each of the categories. She is the daughter of James and Valerie Saurer of Partridge, and is a seventhgrade student at Whitesburg Middle School.

We have had more bad rainstorms lately than anyone can ever remember us having before.

This past week they hit Blair Branch, Spring Branch and Walters Branch to name a few of the flooded areas.

Blair Branch was hit so hard and washed out so many places in the road that it was difficult to get to the Adams, Thompson, Blair reunion on top of the hill. Church services were cancelled, but Ellis Adams did hold prayer for those attending.

The county road crew worked hard to get the roads fixed.

Many have lost loved ones this past week. Several local family members attended the funeral for ‘Gay’ Lewis, which was held in Frankfort. Vette took Lois, Lovell Blair and Grace down and Freddy Watts took some of the family with him. They were stopping in Georgetown to visit Jamie and Nette’s grandbaby.

On our way home, Bob and I stopped in Nicholasville and had dinner with Jessie, our daughter.

Harriet Bolling and Doyle Johnson also died, and Curt Caudill, who lived in the Dock Lundy and Mary Ann Adams home above Letcher School, died from a heart attack.

Harriet was a longtime member of Mount Olivet Church at Blackey, and had been a patient at Letcher Manor for quite a few years.

Doyle had also been in poor health and in the nursing home for a few months. Mary Sue Pinyerd had taken care of him for so long at her home at Jeremiah.

Sue, Densmore and Colleen Goodson have returned from a week at Myrtle Beach. They had a good time.

Lillie Moss Hale celebrated a birthday at Tommy Harris Smith’s with her brothers and sisters and other family attending. She is doing better after her recent pacemaker adjustments.

Roy Kenon and Billie Smith stayed with Lee and Wilma Pridemore and celebrated Billie’s recent birthday with family and friends.

Luther Adams of Morehead, his sister Danola Bell of Ohio, and their nephew Doug Raglin and his wife ‘Doo-Doo’ of Michigan, all came in and stayed a couple of days at “Gramp’s Cabin” on Pratt Fork. They had lots of kinfolk come in to visit with them while they were here. They plan on coming back to the George M. and Sally Banks Adams family reunion on Oct. 20.

Ellis and Ila Adams had a visit from Ila’s baby brother and his wife Dean and Susan Whitaker of Delaware.

About 120 or so former Stuart Robinson students attended this past weekend’s reunion. I hope all had a good time visiting and recalling past times.

The Gurney and Callie Croucher family also had their reunion last week at the homeplace on Jeremiah. Some of them also attended the Stuart Robinson reunion.

Ernie and Janie Caudill have had their niece and her children from Cincinnati visiting for a few days. It was nice to meet them when they came by my shop, and I was happy they were pleased with their purchases.

Janie’s brother, Wilgus, and others also stopped by at their old homeplace for a visit.

That’s it for now.