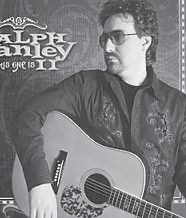 The Jenkins Homecoming Days Festival committee is proud to announce that our Saturday n ight headliner on August 29 will be the exciting country music entertainer Ralph Stanley II, “Two” to his friends. It’s always nice to have a well known entertainer grace our stage but it’s even nicer knowing that he is one of our own. Ralph “Two” is the son of the legendary Ralph Stanley who has been in the music business for nearly 60 years. Both call Coeburn, Va., their home.

Although Ralph II now plays the guitar, his first introduction to a musical instrument was when he was three years old when his dad began teaching him to play the banjo. He soon fell under the spell of the undisputed king of boyhood musical desires, the guitar. He spotted one under his sister’s bed and by age 5 he was learning to play. But despite his interest in the guitar and the fact that he was occasionally travelling with the Clinch Mountain Boys on the road, he had not yet developed an ambition to play professionally.

At about age 12 he found an old 1970s video of the late Keith Whitley during his tenure as lead singer for the Clinch Mountain Boys and this inspired him to become a professional musician. After seeing Whitley, he was hooked and spent hours in the basement honing his skills and weathering the comparisons to his late uncle Carter Stanley. His persistence paid off and he took the stage as lead singer with Ralph Sr. and the Clinch Mountain Boys in June of 1995 when he was 16 years old. A year later he graduated from high school.

Since then he has earned the respect of Stanley fans everywhere and has garnered praise as a strong new artist in his own right.

When Ralph II decided to pursue his own musical career he found that being the son of a legendary entertainer was definitely a plus. Most artists begin their careers in relative anonymity, a nameless face in the crowd, but not if you are the son of a legend. So it was with a certain amount of trepidation that Ralph II released his first solo album a couple years ago, “Listen to My Hammer Ring”.

He waited for the public to pass judgment. Finally the verdict came — it was good! In fact, it was very good. The reviews were excellent and the response from the fans was enthusiastic.

His second release, “Pretty Girls, City Lights”, further established that he, like his father, has a powerful voice that is uniquely his own — a voice and a style he had been developing for a long time. In this CD we hear a more relaxed Ralph II handling his smooth baritone voice with the practiced ease of a veteran and the level of confidence and maturity that most new artists can only hope for.

Though Ralph II has spent the past 14 years backing his bluegrass legend father as a lead vocalist and rhythm guitarist, his fifth solo album, “This One is Two”, goes a long way toward establishing “Two” as his own man. Like Keith Whitley, one of his musical heroes, “Two” is a sensational honkytonk vocalist who is completely at home with a hardcore country song. “This One is Two” makes a pronounced move away from bluegrass and toward country, although for many the distinction may be hardly noticeable. Critics are saying that Ralph II’s newest CD is one of the finest country albums of the year.

Ralph Stanley II, “Two”, will take center stage on Saturday, August 29 at the Jenkins City Park beginning at 9 p.m. Ralph and his entourage will be there to sell his CDs and other souvenirs to his many loyal fans.

Last year’s Jenkins Homecoming Days Festival set the standard for good, wholesome family entertainment. The public responded with a record turnout each day and night. Now that we have set the standard we dare not take a step backward. This year’s festival will be August 27, 28 and 29.

Our Thursday night headliner will be the dynamic Tim Michaels and the Drillers. This Pikevillebased musician is receiving some of the highest accolades for his stage presence and his eclectic music. Check out his website at timmichaels.net and listen to his music; you won’t be disappointed. When you see him in person you can expect generous selections from your favorite genres of music, all aimed to please the varied tastes of the most critical listener. Tim will go on stage at 8 p.m. and play ’til 9:30 and beyond.

On F rid ay n ight o ur headliner will be the legendary Marlow Tackett with a command performance. Last year Marlow drew the biggest Thursday night crowd in the history of Jenkins festivals. The legions of loyal fans filled up the park hours before he went on stage. The crowd was literally standing room only as he performed one of the most memorable shows of the decade. Marlow and his Music Company Band will start at 8 p.m. and play as he says, “as long as someone wants to hear me.”