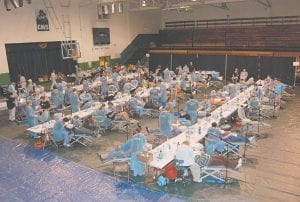 More than $111,000 worth of free health care was provided to 599 people who came to a two-day clinic in Jenkins.

“I thought it was a huge success,” said Hettie Adams, coordinator for the Letcher County RAM event. “I just wish more people would have taken advantage of the free health care. I would like to have seen 1,000 come through, but for the 600 that did it was awesome.”Organizers of the Remote Area Medical Volunteer Corps (RAM) expedition held at Jenkins High School said 287 eyeglasses were made during the Sept. 26 and 27 event, including nine for children.

A total of 846 services were provided to dental patients including 343 tooth extractions, 278 dental fillings, 112 dental cleanings and 30 denture or partial repairs.

“All the volunteers made the services possible,” said Adams. “It was all the dentists, doctors, optometrists. The general volunteers helped tell the patients where to go and helped them register and fill out paperwork.” 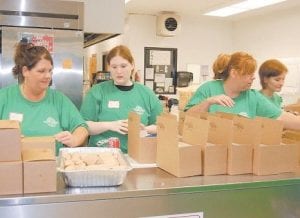 Adams said that Missy Matthews, one of three owner/operators of Childers Oil Company, and her staff worked tirelessly to prepare and serve food to all the volunteers and the patients.

Jenkins Middle High School Principal Lisa Carroll said many of her students joined her in volunteering.

“I think it is great that they could work with the doctors and get in volved,” said Carroll. “We are proud of our students and proud of our community.”

Whitesburg resident D.J. Frazier volunteered in the dental area during the expedition and said she won’t forget the members of a Letcher County family who showed up in desperate need of medical care.

“The dad had been working in the mines and had been laid off,” said Frazier. “Something like dental work would be put on the back burner. For me, if that one family was all that got treated it was worth it.”

Frazier said the coal miner’s five-year-old son was afraid to be treated in the dental station, but eventually settled down after the dean of the University of Kentucky College of Dentistry sat down in the floor with the little boy and calmed him.

“He was crying his eyes out and she was so good to him,” said Frazier. “Those doctors were so nice to the patients.”

Frazier was impressed by the quality of care patients received at the RAM event.” They were there to volunteer their time because they were so patient about what they were doing,” said Frazier. “They really took an interest in the patients and cared for them.” Whitesburg dentist Dr. David Narramore said dental patients received more comprehensive treatment at the Jenkins RAM expedition than other RAM expeditions he been involved with.

“They worked continuously on those patients,” said Narramore. “I know one patient had a cleaning, filling and an extraction.”

Adams said everything was put into perspective for her when she drove to the Gateway Industrial Site on Friday night to hand out numbers for people to receive free health care. “I realized how much they needed the free medical treatment,” said Adams.

Carroll said she was amazed by the number of patients who were seen on Saturday and then came back on Sunday to receive more care.

“Some of those folks needed work done so bad that they came both days,” she said.

“Our event came within 25 patients of what Pike County did in 2008 the first time they did it,” said Narramore. “I think that is a tremendous response despite the rain and the Mountain Heritage Festival.”

Narramore is confident that RAM will come back to Letcher County.

“It was a good effort on the part of everyone and I want to say thank you for having RAM in your community,” wrote Ron Brewer, a RAM coordinator, in an email to Narramore. “I hope we get to work another RAM clinic together soon.”

The next RAM expedition is scheduled in Grundy, Va., at Riverview Elementary School on October 3 and 4.