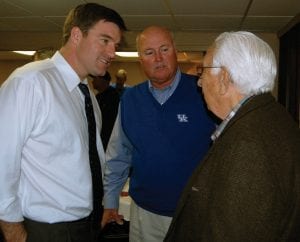 BACK IN LETCHER — Kentucky Attorney General Jack Conway greeted State Senator Johnny Ray Turner and Letcher County resident S.T. Wright during a campaign stop in Letcher County last week. Conway, a Democrat, is running against Republican candidate Rand Paul, a favorite of the Tea Party, in the election for the U.S. Senate seat now held by Jim Bunning. Paul’s plan to replace the federal income tax with a statewide sales tax on retail goods was met with heavy criticism by Conway’s campaign on Tuesday. “Working people are having a tough enough time making ends meet,” Conway spokeswoman Allison Haley said. “They don’t need a 23 percent sales tax on everything they buy — from groceries to gas to medicine.” (Photo by Sally Barto)

Republican U.S. Senate candidate Rand Paul said Tuesday the federal tax code is a “disaster,” and he wants to replace the income tax with a retail sales tax.

Paul said that he would support changing the federal tax code to get rid of the Internal Revenue Service, and he would vote to repeal the Sixteenth Amendment that created the federal income tax.

“The federal tax code is a disaster no one would come up with if we were starting from scratch,” Paul said in a written statement distributed by an anti-tax group and verified by his campaign. “I support making taxes flatter and simpler. I would vote for the FairTax to get rid of the Sixteenth Amendment, the IRS and a lot of the control the federal government exerts over us.”

Paul declined to answer questions on the issue during a campaign stop in Louisville Tuesday afternoon. At a previous stop in La- Grange, he told reporters he’d also like to see the U.S. Department of Education eliminated.

The FairTax proposal has been championed by the Texas-based group Americans for Fair Taxation and a newly formed affiliate, Fair- Tax America Support Team. Paul’s former campaign manager, David Adams, is a member of the affiliate’s governing board.

Paul faces Democrat Jack Conway in one of the most closely watched races in the nation. They’re seeking to replace 78-year-old Sen. Jim Bunning who opted not to seek a third term.

University of Kentucky political scientist Stephen Voss said Paul’s stand could help him in Kentucky where voters, especially those of the tea party persuasion, are angry about the tax burden.

“It could play well in a state like Kentucky when you show all the things that are not progressive about the current tax system,” Voss said. He noted that the issue is ripe for political spin.

Kentucky tea party gubernatorial candidate Phil Moffett, whose campaign is managed by Adams, predicted Paul’s stand will energize his base of support three weeks before Election Day, though it could dissuade others.

“The problem with the FairTax is that it’s one of the easiest things to demagogue,” said Moffett, who has made a similar statelevel proposal a centerpiece of his campaign. “It’s an easy way to scare some voters away. But those who would be scared away probably aren’t up on the FairTax and likely wouldn’t have voted for Rand Paul anyway.”

Conway spokeswoman Allison Haley said Tuesday the proposal calls for a tax of nearly a quarter on every dollar.

“Working people are having a tough enough time making ends meet,” she said. “They don’t need a 23 percent sales tax on everything they buy — from groceries to gas to medicine.”

Adams said the group is “delighted” to have Paul among the proposal’s backers, who include Sen. Jim DeMint of South Carolina. DeMint has come to Kentucky to campaign for Paul.