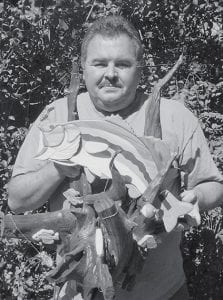 Randall Click of Betsy Layne in Floyd County has been making woodcrafts for 15 years but only recently has he realized the marketability of his fine crafts. When I spoke with him by phone, he revealed that he and his dad, Robert, bought a scroll saw and started teaching themselves how to cut out various pictures and designs.

“Neither of us had any formal training with shop tools or art; we just decided to see what we could do. I guess you could say we were self-taught,” said Randall. “We bought a cheap scroll saw for $80. I would cut out stuff and throw it away. I kept telling myself that I could do better than that. After a while we both realized that we could do better if we had better tools. That’s when we went out and bought an $800 saw. That was the turning point in our crafts hobby.

For years we just made stuff and gave it away to family and friends. When folks saw our work they started giving us orders and making requests. That provided us with the challenge we needed to go to the next level. Along the way we experimented with different varieties of wood and different techniques. We studied magazines and catalogues to educate ourselves. We didn’t even think about making money. If we sold a piece for enough money to pay for our tools, patterns, magazines and our wood, we were satisfied. Just having someone appreciate our work was the most important aspect.”

With my friend and cousin, David Little of Jenkins, I recently visited Randall at his home in Betsy Layne to gather additional material for my story. David had come across some of Randall’s work at a small store in Betsy Layne quite by accident. His crafts had been on exhibit there for months but no one had showed any interest. David, who is also a crafter, recognized the quality of the intricately designed objects and bought one of them, a stern wheel from a ship with a picture of the ship in the center of the wheel. It was made of inlaid pieces of wood put together like a puzzle.

He was so impressed with the item he wanted to meet the artisan. The store owner didn’t volunteer any information other than that the crafter was a Click from Betsy Layne. He began calling every Click in the Betsy Layne phone book until he finally found Randall’s son, who then put him in touch with his dad.

We had an arts and crafts show scheduled at the Little Shepherd Amphitheatre in Jenkins and we were actively recruiting those who made legitimately hand-crafted items. David followed up his phone call with personal visits to Randall’s home and his shop. Randall had never been to a crafts show before and didn’t think his work would be good enough to exhibit along with the work of more experienced artisans. David continued telling Randall his work was as good as or better than that of most crafters and finally persuaded him to fill out the application and send in his fee.

During the ensuing weeks David and Randall became good friends and David bought several more of his items. As the friendship grew Randall revealed more of his personal life. Randall was now unemployed and living with his mother and sister. He had been a butcher by trade for 28 years. He had developed a back problem and had to quit work. To make matters even worse, he was involved in an auto accident and did further damage to his back and neck and caused nerve damage to his legs. He exhausted all of his resources and sold a few crafts to provide financial sustenance. He wanted and needed to go back to work but the doctors would not allow him.

Randall had accumulated dozens of objects he had made. As the date for the Little Shepherd Arts and Crafts Show in May got closer, the duo got more excited about the event. Randall decided to rent two spots at the festival to have room for his exhibit. Each time David visited he would bring back a carload to keep in storage at his home in Jenkins until the show. At the beginning of the three-day event I recall telling Randall, “I hope you sell a thousand dollars worth of your crafts”. When the event was over I reminded him of that wish. He took a long draw off his cigarillo and with a wide smile he said, “That’s close; I haven’t had this much money in my pocket in years.”

Randall speaks often of the many hours he and his dad spent together in their shop honing their woodworking skills. In his home Randall showed me several pieces of his work which are not for sale. A grandfather clock which he and his dad made jointly stands in a corner as a lasting memento to their friendship. He pointed to a cabinet in the living room which employs fretwork.

“That cabinet required 6,000 cuts,” he explained. “It’s called fretwork. You draw the pattern on a piece of wood then drill the holes. With each cut you have to remove the blade from the scroll saw and reinstall it through the holes. The tiny blades are then used to cut the intricate, ornamental design from one hole to the next. It requires many hours of painstaking work and if you make a mistake you may have to throw it away and start all over.”

Among his most popular items are the mosaics which employ the intarsia art form. Sportsmen especially like his wildlife figures. Deer hunters and bass fishermen buy his figures as fast as he can make them. He does not stain the wood to get the desired effect; instead, he utilizes the natural color of many varieties of wood to show the primary color of the object then he uses lighter and darker hues to show shadows and highlights. “It is much like an artist uses different color of paint”, explained Randall.

The cornucopia which this buyer could not resist was especially impressive. The 72 grains on the ear of corn were carved individually and inlaid to look real. The apple is made of red heartwood and the eggplant is made of purple heartwood. Both woods are imported from South America. The wood costs about $40 per square foot.

Each piece of the mosaic is carved individually and sanded with numerous sandpapers which range from 80 grit to 4,000 grit. Steel wool is sometimes used to make each piece even smoother and enhances the natural beauty of the wood. Sometimes tung oil is used as a coating for additional luster but lacquer is never used for a finish. Many of his objects have from 200 to 300 pieces.

Randall speaks often of the inspiration provided by his father, who died of cancer four years ago. “When I was young we didn’t have a whole lot in common but he was always supportive in whatever I attempted,” said Randall. “In his later years we became best of friends through our hobby. Whenever we had a day off we would work from early morning to late at night in the shop. When he got sick the cancer spread from his kidneys to his lungs. His doctor told him that his only hope was to have the lung removed. We had been working on a clock. The last day he was in our shop he laid down the piece of wood and said, ‘I’ll finish that when I come back from the hospital.’ But, he never came back. He never recovered from the surgery. I was devastated. I had lost my best friend. I didn’t have the heart to go back into our shop because the memories were too vivid. I considered selling all the tools and quitting but our friends in our church encouraged me to continue. They said, ‘Your dad would have wanted you to continue.’ After about a month I got the courage to go back into the shop. I remember sitting there crying. I had never felt so alone. After four years I’m learning to cope. Now when I’m there I’m never really alone. His shirt which he wore to work in the shop is still there and his coffee cup. I won’t let anyone touch them. I still have his photograph on the wall. It’s a picture of him cutting out a piece of a clock with our scroll saw. Many times I’m there in the shop and I can still hear him talking to me, encouraging me and giving me fatherly advice. Now my shop is a safe haven. I can get absorbed in my work and my troubles disappear.”

A few months ago another chapter in his story unfolded by fate. His brother-in-law, Scott Bailey, broke his leg doing construction work and was laid-up. “He was bored to death from being immobilized,” said Randall. “He came to my shop and offered to help me get caught up on some back orders. Scott is a carpenter by trade and took to the woodcrafts naturally. He is especially good with the intarsia art form. When Scott heard about the Little Shepherd Arts and Crafts Show in Jenkins he got excited and encouraged me to attend. Dad had always talked about doing a show but when he inquired about them they were too expensive. That show up on the mountain in Jenkins at the Little Shepherd Amphitheatre site was a turning point for me. I was always shy and had trouble interacting with strangers. At that show I made a lot of friends and it built my confidence. David Little has become a father figure to me; I consult him often. Greg Bentley, a member of the arts council, has become a dear friend. He is an avid deer hunter and had ordered a mosaic of a deer. I had one at the arts and crafts show and had two people wanting to buy it. Greg told me to just go ahead and sell it to the other person and I could make him one later rather than lose a sale. Meanwhile I wanted to sign up for the arts and crafts show at the Jenkins Homecoming Days Festival in August, but I didn’t have the money to register. When Greg heard about that he sent me the money to prepay for the deer I was making for him. I’m taking a lot of orders now and sending items to several states. I’ve even sent some to London, England. No one has ever told me that my crafts are too expensive; many have commented that my price should be higher. It’s worth a fortune to see people’s faces in amazement when they see my work whether they buy or not.” Randall also makes jewelry chests, gun racks, Christmas decorations, welcome signs and much more.

Update: Randall said that he has recently received a settlement for the auto accident and is busy taking care of some needed home repairs. But he is not too busy to continue making crafts. “I wouldn’t dare miss the Indian Summer Folk Festival in Jenkins,” said Randall. “When I’m there I don’t feel like a stranger; they make me feel like family.”

Randall is a divorced father of two and has one grandchild who is one year old.

The second annual Indian Summer Folk Festival sponsored by the Cumberland Mountain Arts and Crafts Council in Jenkins is scheduled for October 5, 6 and 7 at the Little Shepherd Amphitheatre site. The festival will feature arts and crafts, exhibits, demonstrations, hikes, music and good ol’ mountain food. Come join us as we preserve and celebrate our proud mountain heritage. For additional information, call our office at 832- 1453, Bessie Shepherd at 633- 9123 or Ked Sanders at 832- 4122.