Randall Cobb happy with role of being ‘the guy’ at UK 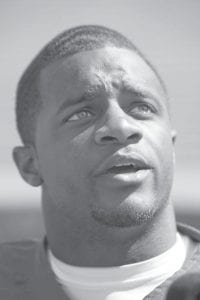 The competitor in Randall Cobb was evident early.

The Kentucky receiver’s video game battles with his older brother lasted well past Cobb’s bedtime when the siblings were growing up in eastern Tennessee.

Night after night they played John Madden football. Each time Cobb lost — which was usually — Cobb would mash the reset button.

“I wouldn’t quit until I beat him,” said the junior wide receiver said. “Some days, it took a loooong time.”

Cobb hates to lose. He is obsessed with it, actually.

“He’s the kind of guy, it doesn’t matter if it’s horseshoes, he’s going to find a way to beat you,” said offensive coordinator Randy Sanders. “If he’s got to throw five ringers to win, he’ll do it.”

It’s a mentality that has paid off well at a school where consistent success has been elusive. That’s slowly changing, and Cobb has been tasked with helping the Wildcats continue their move toward respectability in the tough Southeastern Conference.

“This is his team, period,” said coach Joker Phillips. “This is his football team. He’s the guy that makes us go. He’s the heartbeat.”

He was even better lining up in the backfield as part of the “WildCobb” package, scoring 10 times despite little suspense about what would happen when the ball is snapped. Cobb took over 110 snaps out of the Wild- Cobb last year and threw it just 13 times.

All that running, however, took a toll.

Listed generously at 5-feet-11 and 186 pounds, Cobb’s body began to betray him as the touches mounted. He practiced little toward the end of the season, and Cobb found himself a bystander in pressure situations because he was out of gas.

None were more obvious — or more painful — than in the season finale against Tennessee. Trailing by a field goal with less than 2 minutes left, Cobb led the Wildcats to the Tennessee 10 with a chance to end Kentucky’s miserable 24- year losing streak to the Volunteers.

Instead, it was freshman quarterback Morgan Newton who tried to get the final 30 feet to the end zone. It didn’t happen. Kentucky settled for a field goal. Tennessee won in overtime.

The lesson learned was simple: For all of Cobb’s talent, Kentucky’s off ensive gameplan needs to expand beyond putting the ball in his hands and letting him do his thing.

It’s a notion that frustrates the competitor in Cobb, but one that soothes the teammate in him.

“You want to see your teammates do well,” Cobb said. “I want the ball, sure. But I know there’s plenty of talent here to do special things.”

“We’re not going to set out there and say, ‘Well, he’s had so-and-so catches, he’s done,’” Sanders said. “We want to win games and we know we need Randall out there.”

They also need him to not to be the best quarterback on the team. The Wildcats named Mike Hartline the starter on Monday, hoping he can finally take ahold of the position after two injury-plagued years.

Cobb is easily the better athlete, though he jokes he’s done so much weightlifting trying to get his arms big enough to give him the push he needs to get off the line of scrimmage that he can’t throw anymore.

“Those days are over,” he said with a laugh.

He views himself as a receiver now. He thinks he can be a good one. Receivers coach Tee Martin has helped Cobb learn the nuances of route-running. There’s more to it, it turns out, than counting your strides and turning for the ball.

All of which is fine by Cobb. He knows if he’s going to make it at the next level, it will be as a receiver or a kick returner. The days of dreaming of throwing touchdown passes in the NFL have been replaced by dreams of catching them.

Though Cobb allows he’s being pestered by friends and family about his future after this season, he’s got more pressing concerns: Getting Kentucky to a bowl game for a fifth straight season chief among them.

Cobb been urged by Phillips to become more of a vocal leader. He tried it as a freshman when injures forced him into the starting quarterback role.

On a veteran squad, however, the youngster was tuned out and he backed off and let his play do the talking. That’s not enough these days.

Cobb is fine with it. So long as the Wildcats win.

“If I have to talk, I’ll talk,” he said. “Coach talks about me being the face of the team. I just see it like I’m the guy representing all of us. We’ve got talent and people need to start realizing it.”