By IDA WEBB and IRENE SEALS 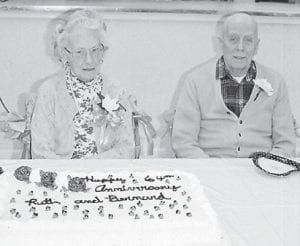 ANNIVERSARY — A surprise party was given for Bernard and Ruth Raper to celebrate the couple’s 64th wedding anniversary.

There was a big anniversary celebration at Boone Fork Center March 31.

A large crowd gathered at the center for a surprise 64th wedding anniversary party for Bro. Bernard and Sister Ruth Raper, and what a surprise it was. They didn’t suspect a thing.

A special table and two chairs were decorated for the special occasion in silver and black. A bride and groom and beautiful floral arrangement adorned their table. Their chairs were draped in silver with black and silver bows on the back.

Their daughter-in-law, Linda, usually has them to the center by 10 a.m., but had to find excuses for a later arrival so everyone could gather in to surprise them as they came in the door. The surprised looks on their faces said it all.

Sister Ruth said she was ready to marry Bro. Bernard, “all over again.”

After dinner, a beautiful anniversary cake and ice cream were enjoyed by all.

Bro. Raper thanked everyone and thanked God for blessing them with 64 wonderful, happy years together, and for a wonderful family, and friends.

Until next time, God’s blessings on everyone.