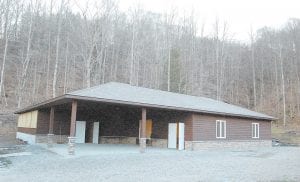 Rescued raptors from all over southeastern Kentucky will be treated in this new building at the Letcher County Extension Service in Whitesburg. The building will be dedicated in March. (Photo by Sally Barto)

Master falconer Mitch Whitaker is amazed by the number of injured fowl the Letcher County Extension Office has cared for during the 15 months since Whitaker obtained a rehabilitator’s license.

Whitaker, who is employed by the University of Kentucky as the maintenance manager at the Letcher County Extension Office, said at least 25 birds including an immature bald eagle have been rehabilitated within the last year. About a quarter of those have received a clean bill of health and were released back into the wild.

Whitaker said the program grew quickly and more space was needed to house the animals. The Board of Directors of the Letcher County Cooperative Extension Taxing District answered by approving the construction of a 3,300-square foot building to house the hawks and owls.

Whitaker said the Letcher County Extension Outdoor Education Center was needed “to provide a better place for the birds.” The project, which cost roughly $100,000, was completed in about six weeks and opened Dec. 2.

Before the building was finished Whitaker went to the extension office early in the morning to feed the animals and let them out of their cages and boxes. He is now in the process of teaching 4-H students and volunteers how to feed the fowl.

Whitaker said the new building also helps with keeping stress levels down on the birds and reducing the amount of time they are around humans. Six birds are living in the new center including one horned owl, three barred owls and two red-tailed hawks.

Whitaker said for the building to be fully functional, movable walls were installed between each of the eight pens in order to make accommodations for the number and type of birds located in the building at any given time.

“It’s so much easier to maintain these birds,” said Whitaker. “Now everyone has like their own hotel room.”

The movable walls are located on an enclosed roller system so the birds aren’t injured.

The building also includes a large classroom in which about 20 students involved with the 4-H program learned to cure hams last week. A water hose was used to clean up the salt mess left behind.

Jason Brashear, the Letcher County agent for 4-H and youth development, said agents no longer have to worry about getting the large conference room dirty. Agents can now work with plants, mushrooms, maple syrup and arts and crafts in the new classroom, which has a concrete floor.

The building blends in with the nearby hillside with its brown exterior and it matches the extension office building with the accents of similar stone.

Whitaker still hopes to be able to build a large eagle pen behind the maintenance garage. He said that after he released a bald eagle last February he has received calls from other people who have found injured birds.

“There is no other facility close in the eastern part of the state,” said Whitaker. “Now the word is out. So far we have taken all of those calls.”

Whitaker takes the owls and red-tailed hawks to schools so children can see the birds up close.

“It’s getting where every kid and county knows us,” said Whitaker. “All of the kids seem interested in them.”

The newest addition to the raptor rehabilitation program is a juvenile barred owl named Darius. A farmer in Pineville recently hit the owl with his car and contacted Whitaker.

“He could have left that bird lying there,” said Whitaker. “He fed it and took care of it.”

Whitaker said owls use car headlights as a hunting mechanism and when field mice get spooked by the headlights the owl makes a move. He said owls can be hit by a vehicle while trying to catch the mouse.

Whitaker drove to Pineville and brought the owl back to Whitesburg. The man asked Whitaker to name the owl Darius after Darius Rucker, a country music star who once was the lead singer of Hootie and the Blowfish, a 1990s American rock band.

Whitaker said one of Darius’s eyes was injured but is doing better. He thinks the owl will eventually be released back into the wild. Until then, Darius will stay in one of the stalls in the new facility.

An open house for the outdoor education center will be held at 2 p.m. on March 2.