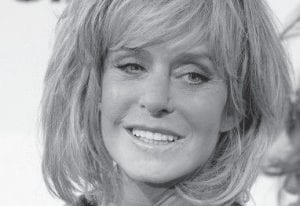 Actress Farrah Fawcett, who died June 25, posed for photographers on the red carpet before Comedy Central’s “Roast of William Shatner,” in Los Angeles in 2006. (AP Photo)

Before her death last month, at age 62, the actress had come to terms with the illness and agreed to have her suffering and treatment chronicled for the television documentary “Farrah’s Story,” that aired in May.

But the anus is associated not only with defecation but also a taboo form of sex, observed Dr. Barron Lerner, a Columbia University physician who wrote “When Illness Goes Public: Celebrity Patients and How We Look at Medicine.”

However, in the wake of Fawcett’s illness, it’s likely that some patients will ask about her case and those topics will be discussed, he said.

The vaccine — called Gardasil — came on the market in 2006 to help prevent cervical cancer. It’s designed to protect against four types of HPV associated with cancers of the cervix, anus and upper throat.

Piro, Fawcett’s doctor, said Gardasil is an important but underused defense against cancer, and strongly endorsed increased vaccinations. But he and others stopped short of saying it should be touted as a measure that will save women from Fawcett’s fate.

She never discussed with him any feelings about whether young women should get the HPV vaccine, he said.

The vaccine’s manufacturer, Merck & Co., has declined to cite Fawcett’s case as a reason for women who get the vaccine, a decision Lerner applauded.

“I think that to the degree that Merck and advocates for the disease are being cautious, that’s great,” he said.