By SONYA COLBERG The Oklahoman 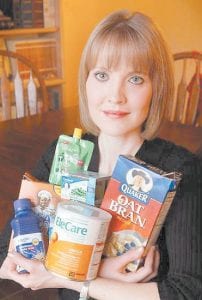 Oklahoma resident Layla Payton was diagnosed with an extremely rare eating disorder which severely limits the types of food she is able to eat. Payton holds the few foods and food supplements she can eat. (Photo by Jim Beckel, The Oklahoman)

Layla Payton recalls when doctor number 20- plus threw up his hands in frustration and told her she was anorexic.

He said all he could do was send her to a psychologist. Then he strode out the office door. Payton ran after him.

“I’ll do anything. I will. I will do whatever,” she told him.

“I was starving,” Payton explained.

But during her appointment with the referred eating disorders specialist the next week, the psychologist gave her reassuring, yet somewhat unsettling, news. She was not anorexic.

So, armed with the specialist’s letter stating that she is not anorexic, the 107-pound, 5-foot 6-inch mother of three continued to search for answers for a way once again to eat a hamburger or popcorn or her mother’s Christmas gingerbread cookies. On good days, she eats baby food and maybe some applesauce. On bad ones, she survives on a liquid dietary supplement.

Though there was no way of knowing it then, Payton was within weeks of finding someone who would diagnose her with eosinophilic esophagitis. A rare disease estimated to occur in about one in 2,000 people, the disorder involves an inflamed or injured esophagus caused by white blood cells that build up in reaction to foods, allergens or acid.

Her mysterious symptoms first appeared when she was just a week old. The child seemed to show puzzling signs that went beyond typical new baby issues, said her mother, Doleta Wood.

Her parents spent nights walking the floor with their colicky baby and days taking her to doctor after doctor.

Even long after she outgrew the colicky stage, entered childhood and became an adult, Payton remained thin and sickly, suffering from asthma, allergies and nausea. She went through frequent bouts of vomiting and inability to swallow.

Still, Payton homeschooled her active sons, Skyler, 15, and Blayne, 12, and she did her best to work around her poor immune system, sickness, bronchitis and pneumonia.

“With each child, I got sicker,” Payton said.

Shortly after she and her husband, Brian Payton, welcomed their third son, Tate, to the family seven years ago, her difficulty swallowing flared up, along with bouts of sore throat, extreme chest pains and burning esophagus.

Her mother, a registered nurse, has turned the care of her daughter into another job, taking her to see doctors and sometimes falling asleep at her computer while she searches for answers on the Internet and in books.

One day as Wood was about to leave the kitchen of her daughter’s Choctaw area home, Payton grabbed her mother’s arm.

“ The throat spasms were so bad, they literally knocked her to the floor. She’d fall to her knees,” Wood said, crying and apologizing for her tears.

The string of doctors and tests continued year after year as her symptoms declined at times and increased at others. Payton had X-rays, heart monitors, ultrasounds, MRIs, CT scans, biopsies, sinus surgery and gall bladder surgery.

At last, around Christmas

2008, her allergist, Dr. Warren Filley, referred her to Dr. Philip Miner, an Oklahoma University Medical Center gastroenterologist and president and medical director of the nonprofit Oklahoma Foundation for Digestive Research.

Payton said within minutes of telling her story to Miner’s physician’s assistant, he told her what was wrong. Twelve years ago, even before “eosinophilic esophagitis” had become a medical term, Miner had written a paper on the little-understood issue. He described the condition of a woman who couldn’t swallow within five minutes of eating pheasant provided by her husband, who was a hunter.

Miner said the disorder, sometimes called “EE,” involves cells of the immune system that interact to protect the human body.

“Those are the cells that are there to serve and to protect. But this is serving and protecting gone astray,” Miner said.

The cells cycle in and out of activity over the human life span and are often associated with certain foods. When the cells become overactive, they may cause spasms of the esophagus and gastrointestinal symptoms.

One way of managing the disorder is to identify and avoid foods that trigger the response. Miner said he advises patients to avoid the “seven deadly sins” of beef, pork, wheat, onions, chocolate, tomatoes and orange juice, all commonly associated with immunologic problems in the gastrointestinal tract. Payton now avoids those things.

While drugs that block the eosinophil activation now are under investigation, one treatment is to have the patient swallow an inhaled steroid designed to go into the lungs.

“Dr. Miner put me on the inhaler. In three days, I went from Ensure and, literally straining things from cheese cloth, to eating scrambled eggs. I was kissing his feet,” Payton said.

But the troublesome cells seem to have become overactive again. She has been unable to eat because of difficulty swallowing over the past three months. One recent dinnertime, she happily sipped a bit of cheese sauce from her homemade macaroni and cheese but couldn’t eat the meal she prepared for her family.

“She is wasting away,” Wood tearfully said of her daughter.

Payton just received a $500 box of a promising new predigested food formula and continues working with her doctor.

But she’s worried that her youngest son may suffer from the problem.

The 7-year-old shows symptoms, including choking so severely he’s been rushed to the emergency room. “ If there’s someone out there scratching their head because they have a baby who’s choking on food or if they have a teen who seems anorexic, maybe they’re not lying. Maybe they can’t swallow,” Payton said. “There’s no cure and may never be. But there’s hope.”