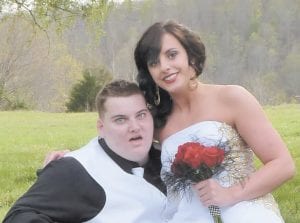 Andrew Mullins posed at Mayking with Morgan Wilson, his escort to the Letcher County Central prom.

When 19-year-old Richard Andrew Mullins told his parents that he wanted to go to prom this year, they had just one week to help him get ready for the big event.

“It wasn’t something I thought he would want to do,” said Andrea Dawn Mullins, Andrew’s mother.

The Mayking youth, who suffers from an unknown neurological disorder, has been a homebound student since his sophomore year at Letcher County Central High School. He was diagnosed at Duke University several years ago with what is thought to be the only known case of an unknown neurological disorder. Mrs. Mullins said she was told that because his was the only case of its kind, that a prognosis couldn’t be determined.

His physical, mental and behavioral disabilities have advanced since his freshman year, keeping him from participating in most school-related activities, said Mrs. Mullins.

Immediately after Andrew told his mother and father, Harold Richard Mullins, that he wanted to attend the prom, Mrs. Mullins found out the event was the following Saturday night. Helped by today’s shipping technology, Andrew’s tuxedo arrived in plenty of time. 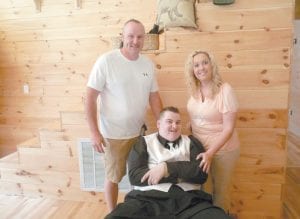 Family members captured this photograph of Andrew Mullins with his parents, Harold Richard and Dawn Mullins, before he left for Letcher County Central High School’s prom. Andrew suffers from a neurological disease, the origin of which doctors have been unable to determine.

Andrew also told his parents that he wanted his sister Kelsey’s best friend, Morgan Wilson, to escort him to the dance.

“She is more like a sister to him than a friend,” said Mrs. Mullins. “She stepped up and said she would do it. She borrowed a dress at the last minute and had her hair and makeup done.”

The day of prom, Andrew asked to hear the song “Cinderella” by Steven Curtis Chapman because, he said, “I am going to dance with Morgan tonight and she is going to look like Cinderella.”

“She looked absolutely beautiful, but what she did made her beautiful,” said Mrs. Mullins.

Andrew also asked that his picture be taken under a special willow tree located on property owned by his grandparents, Harold and Mary Bolling. His sisters, Samantha, Kelsey and Sidney, have all been photographed near the same tree at Mayking. 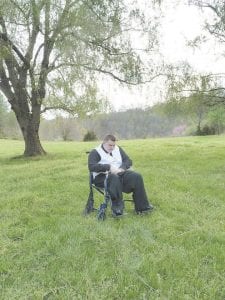 Andrew Mullins sits under the same willow tree where he has often watched other family members have their photographs taken before big events such as the prom or eighth-grade dance.

“After all these years of watching his sisters go to eighth-grade dances and proms, he wanted the same experience,” said Mrs. Mullins.

Andrew’s mom wanted him to be able to make a grand entrance to the prom like many other teenagers do. For transportation to the dance, Andrew and Morgan borrowed a 1966 Chevrolet Malibu convertible owned by Todd Taylor, of Taylor Metal Roofing and Siding.

Mrs. Mullins also called Scotty Pike of Millstone and asked if he could ride his motorcycle in front of the convertible. Pike, a member of the Seventh Sons Motorcycle Club, took the request a step further and asked his friends to join him. Nearly 40 motorcycles, a fire truck and two police cars — with lights on and sirens blaring — escorted Andrew and Morgan to prom. Afton Fleming of the Mayking Volunteer Fire Department drove a fire truck. Letcher County Sheriff ’s Deputy Travis Cantrell and Jenkins Police Officer Josh Richardson drove police cruisers. Bikers also came from Lexington, Knott County and other surrounding areas.

“I love doing stuff for children,” said Pike. “To escort is a show of respect and love.”

As Pike was riding his motorcycle up the hill to the high school, he felt tears and put on his sunglasses.

Other prom goers and those standing in front of the high school watching as the teenagers arrived for prom clapped as Andrew’s family and friends helped him out of the convertible and into his wheelchair. Pike was amazed at the number of girls dressed in fancy prom gowns that kissed Andrew.

“That right there touched my heart,” said Pike.

Andrew has parasailed and ridden on an inflatable banana boat. Now, he can add attended prom to his list of accomplishments.

“To be physically disabled, he is quite adventurous,” said Mrs. Mullins.

Andrew’s favorite song is “Live Like You Were Dying” by country music star Tim McGraw.

“This song is appropriate for him and for (prom) night,” said Mrs. Mullins.

In May, Andrew will be graduated from high school on a smaller scale than the rest of his graduating class of 2014. Because large crowds are difficult for him, Andrew will dress in a cap and gown and graduate May 30 during LCC’s honors day event, which will be held in the auditorium.

“The school has been very accommodating,” said Mrs. Mullins.

Prom and graduation are a once-in-a-lifetime thing, Mrs. Mullins posted on the social media site Facebook.

“There will be no college, careers, weddings and children in his future,” Mullins wrote on Facebook. “After high school, Andrew, like so many, will lead a simple life surrounded by family. His life has so much meaning and brings so much love to us, but nonetheless it is limited. For this reason, last night’s prom was truly amazing. To everyone who helped, my cup runneth over.”