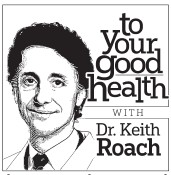 DEAR DR. ROACH: I have had a chronic cough for over 30 years. As you can imagine, I have seen numerous specialists through the years, and none of the prescribed treatments has worked.

A friend suggested I might have laryngeal neuropathy. My doctor didn’t know anything about it. What is the solution for this condition? — A.B.

ANSWER: I can’t blame your doctor for not knowing anything about it. I’ve never recognized a case of it, though I wonder now, having researched it, whether it might be more common than we think.

The word “neuropathy” just means “a nerve problem,” and in this case, it’s one of the nerves in the throat, the superior laryngeal nerve or recurrent laryngeal nerve. It’s a sensory neuropathy, meaning that the nerve is sending the brain incorrect information, which the brain misinterprets as a need to cough or clear the throat. Most people diagnosed with this condition have sudden onset of cough, often after surgery or viral illness. The condition is diagnosed by an expert ENT doctor via a nerve conduction test or a video test of the larynx.

In the largest paper on this syndrome, about twothirds of study participants were relieved by gabapentin (Neurontin), a medication used for many types of neuropathy. Some physicians choose to try this medication without doing the testing. This approach sometimes makes sense, especially when diagnostic testing is difficult or expensive.

DEAR DR. ROACH: I am

47-year-old male in generally good health. In 1999, I was involved in a nasty car accident, ending up in a trauma center. I needed abdominal surgery to repair a ruptured small intestine. Today, 15 years after the fact, is it possible to have issues with the scar tissue from that surgery? I have some of the symptoms of scar tissue problems, but a doc has told me I have diverticulitis. Can you help me? — M.F.

ANSWER: Well, I can’t tell you what you have, but I certainly can confirm that scar tissue, called adhesions, can cause problems even years after the original trauma that caused them.

Adhesions are bands of scar tissue that can envelop the intestine, causing an obstruction. Most of the time the obstruction is partial, and with time and bowel rest, the problem resolves itself. However, sometimes it doesn’t, or the obstruction is complete, and in those cases it will require another trip to the operating room.

Diverticula are small outpouchings in the intestinal wall, most commonly in the sigmoid colon. The condition is called diverticulosis and is very common, with about 20 percent of people at age 40 and 60 percent of people age 60 having them. When they get inflamed, that is called diverticulitis, and symptoms include abdominal pain, fever, nausea and vomiting, or bowel changes.

A CT scan usually can diagnose both conditions. It’s possible to have both problems at the same time, which makes determining the cause of current symptoms difficult. Still, the CT scan would be the next step if you are having symptoms.