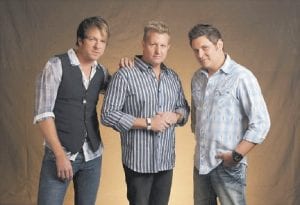 Joe Don Rooney, left, Gary Levox, and Jay DeMarcus, right, of Rascal Flatts are seen in this photo. After a decade as country music’s top-selling group with nearly 20 million albums sold and one of its most popular touring acts, Rascal Flatts is starting the next decade as veterans on top, and in transition. (AP Photo)

Gary LeVox, Jay DeMarcus and Joe Don Rooney were magnets for criticism 10 years ago when they formed Rascal Flatts.

They were called a boy band. Their clothes were funny. And, boys, that ain’t country music.

After a decade as country music’s top-selling group with nearly 20 million albums sold and one of its most popular touring acts, though, Rascal Flatts are starting the next decade as veterans on top, and in transition. (The band is scheduled to appear in Lexington at Rupp Arena on Thursday, January 27. Ticket sales are underway.)

They have moved to Big Machine Records, home of Taylor Swift, to release their next album, “Nothing Like This,” which came out Tuesday, and the guys are contemplating bigger things.

The 40-year-old singer LeVox, 39-year-old bassist DeMarcus and 35-year-old guitarist Rooney have already accomplished more in their one decade than many acts do their entire careers. They grew up on George Strait, George Jones and Merle Haggard and followed their dreams to Nashville. Instead of copying the sound of their heroes, they went in a very diff erent direction and created their own, mixing country twang with a pop sensibility.

They struck gold — and platinum — early on with top hits like “Bless the Broken Road,” ‘’What Hurts the Most” and “Life Is a Highway,” and won multiple Country Music Association and Academy of Country Music awards along the way. More important, they helped lay the groundwork for the revolution that’s sweeping the genre today.

“We had to bring something new to the table,” LeVox said. “Call it what you want but we sure love making country music and I think we’ve been able to open some doors for people like Taylor Swift. Who would’ve ever thought you’d hear Bon Jovi on country radio with Kid Rock? We might’ve had a little hand in opening the door to radio and getting them played.”

Despite all their success, there’s still a segment of Nashville’s power structure that hasn’t embraced the band, and not every country radio programmer is hip to their sound. The guys certainly aren’t bitter, but an invite to be a member of the Grand Ole Opry — which has been extended to acts who’ve been on the scene for a shorter time — would be nice.

“That’s probably the thing that hurts the worst, that people don’t think we’re country. … If they could cut our hearts open and look at our souls, we are country to the core,” said Rooney, who with his bandmates dreams of the day the group is a member of the Opry and the Country Music Hall of Fame.

“We don’t need (industry respect) to be happy,” DeMarcus added. “It would be nice because we love the industry we’re in so much, that our peers in the industry recognize us as viable country music artists. But I don’t know if that’s ever going to happen.”

Not that the band is dwelling on what their critics think. They’re looking to the next decade, hoping to make an even bigger impact than they did in the previous one.

“I think you can sum it up pretty quickly like this: Look at Kix and Ronnie,” Rooney said of the duo Brooks & Dunn, who split in September. “I know they’re over now and they’ve stopped this 20-year run, but the last 10 years have been unbelievable for them. They’ve done things they weren’t able to do the first 10. Looking at that, I think we can learn a lot from that. I think there’s a lot on the horizon from Rascal Flatts.”

That’s why Big Machine’s CEO Scott Borchetta moved so fast when he first heard that Disney would shutter its Nashville imprint, Lyric Street, leaving Rascal Flatts without a permanent home. The band expected to release “Nothing Like This” on another Disney label, concluding their contract. But Borchetta didn’t want to wait around.

“It was a situation where literally the day they announced the departure of (Lyric Street president) Randy Goodman from the label, I had my attorney call out to Disney that day,” Borchetta said. “I’ve always wanted them. I’ve had a long relationship with their management and I’ve known the guys from a distance since the time they came out.”

Old favorites or not, Borchetta wouldn’t have gone after the band had he not seen room for growth. He said the band will attempt to move into new territories and increase their international profile in 2011, among other plans he wasn’t yet ready to talk about.

“An amazing thing happens when you get to 10 years,” Borchetta said. “The perception, the acceptance, the ‘OK, they’re not going away any time soon’ — that gives you a lot of opportunities in the media. That gives you a lot of opportunities to walk into all kinds of different situations and say, ‘We’ve got Rascal Flatts and this is what we want to do.’ The doors absolutely swing open.”

The bandmates see growth beyond the bottom line as well. They’ve been leery of tinkering with their sound, but 10 years gives them the confidence to shake things up if they want.

“When you have some tenure and some years in the business, you can do a gospel record,” De- Marcus said. “It wouldn’t be a stretch for us to do a hard-core country record someday because that’s what we grew up cutting our teeth on. Even bluegrass. There are some sides of us we’ve yet to discover that I’d like to explore someday. I’d like to hear our voices and our take on a lot of diff erent kinds of things.”