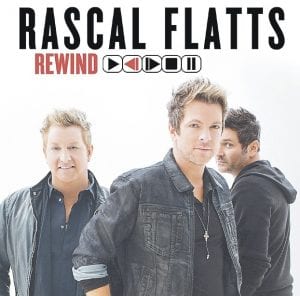 Seen at left is the cover to “Rewind,” the latest album by country music stars Rascal Flatts. The trio takes a much needed step forward on its ninth album. (AP)

Rascal Flatts may have named their ninth album, “ Rewind,” but musically the country-pop trio takes a much-needed step forward.

Punching up arrangements with rock energy (“Payback”) and synth-pop flourishes (“Honeysuckle Lazy”), the band undergoes a contemporary country makeover as it celebrate its 15th year. The result makes for a more fun, mature and diverse sound — washing away the stale taste of recent outings.

On “Rewind,” lead singer Gary LeVox, bassist-pianist-singer Jay Demarcus and guitarist Joe Don Rooney take a bigger hand in their production, cutting more than half of the album on their own. Led by Demarcus, who has co-produced albums by Jo Dee Messina and the rock band Chicago, the trio moves the needle forward on the engaging “DJ Tonight” and the title cut, a recent country Top 10 hit.

The group also brought in pop veteran Howard Benson, who produced five cuts, including the dance floor-ready “Powerful Stuff.” Old hand Dann Huff, who had produced the band since 2006, worked with the group on the catchy “Life’s A Song,” which sounds more like the old Rascal Flatts. But what makes “Rewind” exciting is that Rascal Flatts has fast-forwarded into the future.