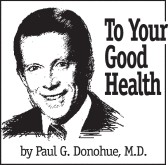 DEAR DR. DONOHUE: Two months ago, I broke out in a shingles rash. I had some pain, but not a whole lot. After the rash left, the pain increased, and it’s still there to this day. I would greatly appreciate any suggestions you might make. I need some relief from this pain. I didn’t think shingles lasted this long. Would the shingles vaccine help? — R.M.

ANSWER: Shingles doesn’t last that long. What you have now is postherpetic neuralgia, nerve damage caused by the shingles virus. That’s the source of your pain.

The entire story is complicated. When you were a kid, you had chickenpox. Even if you don’t remember, even if there’s no record of it, the chickenpox virus infected your body. It remains in a deep sleep inside nerve cells until later in life, when something wakens it and the virus makes its way down the nerve to the skin. There it produces the typical rash and pain of shingles. The rash is gone in about two weeks.

Between 10 percent and 15 percent of those who have shingles will face one of its dreadful complications: postherpetic neuralgia, pain that lingers long after the rash is gone. Pain relievers and time are the only things that treat this shingles aftermath. Sometimes antidepressants given in low doses can ease the pain. Amitriptyline is an example of such a drug. Seizure-control medicines are another group of drugs that can control posther- petic neuralgia. Lyrica and Neurontin are two such drugs.

Capsaicin cream, available without a prescription, applied to the area of pain, might soothe it. Qutenza is a patch impregnated with a high concentration of capsaicin. It’s the latest treatment of the aftermath pain of shingles. A health-care professional has to apply the patch to the skin. It’s left in place for an hour and then removed. It is expensive; make sure your insurance covers it.

Often, doctors have to resort to a combination of treatments to control postherpetic neuralgia.

The shingles vaccine won’t help you now. If given before an outbreak, it prevents shingles in 50 percent of recipients and has a 66 percent record of heading off postherpetic neuralgia.

Shingles is a torment to many older people. The booklet on shingles explains it and its treatment in detail. To order a copy, write: Dr. Donohue — No. 1201W, Box 536475, Orlando, FL 32853- 6475. Enclose a check or money order (no cash) for $4.75 with the recipient’s printed name and address. Please allow four weeks for delivery.