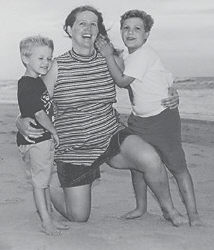 ElizabethDavis is shown with sons Matthew (left) and Jacob (right) during a trip to Virginia Beach in August 2000. She was pregnant at the time and died a month later after the birth of the child. (AP)

U.S. women are dying from childbirth at the highest rate in decades, new government figures show. Though the risk of death is very small, experts believe increasing maternal obesity and a jump in Caesarean sections are partly to blame.

Some numbers crunchers note that a change in how such deaths are reported also may be a factor.

“Those of us who look at this a lot say it’s probably a little bit of both,” said Dr. Jeffrey King, an obstetrician who led a recent New York state review of maternal deaths.

The U.S. maternal mortality rate rose to 13 deaths per 100,000 live births in 2004, according to statistics released last week by the National Center for Health Statistics.

To be sure, death from childbirth remains fairly rare in the United States. The death of infants is much more common – the nation’s infant mortality rate was 679 per 100,000 live births in 2004.

Maternal deaths were a much more common tragedy long ago. Nearly one in every 100 live births resulted in a mother’s death as recently as 90 years ago.

But the fact that maternal deaths are rising at all these days is shocking, said Tim Davis, a Virginia man whose wife Elizabeth died after childbirth in 2000.

“The hardest thing to understand is how in this day and age, in a modern hospital with doctors and nurses, that somebody can just die like that,” he said.

Some health statisticians note the total number of maternal deaths – still fewer than 600 each year – is small. It’s so small that 50 to 100 extra deaths could raise the rate, said Donna Hoyert, a health scientist with the National Center for Health Statistics. The rate is the number of deaths per 100,000 live births.

In 2003, there was a change in death certificate questions in the nation’s most populous state, California, as well as Montana and Idaho. That may have resulted in more deaths being linked to childbirth – enough push up the 2003 rate, Hoyert said.

Some researchers point to the rising C-section rate, now 29 percent of all births – far higher than what public health experts say is appropriate. Like other surgeries, Caesareans come with risks related to anesthesia, infections and blood clots.

“There’s an inherent risk to Csections,” said Dr. Elliott Main, who co-chairs a panel reviewing obstetrics care in California. “As you do thousands and thousands of them, there’s going to be a price.”

Excessive bleeding is one of the leading causes of pregnancyrelated death, and women with several previous C-sections are at especially high risk, according to a review of maternal deaths in New York. Blood vessel blockages and infections are among the other leading causes.

Experts also say obesity may be a factor. Heavier women are more prone to diabetes and other complications, and they may have excess tissue and larger ba-

(Continued from Page B6) bies that make a vaginal delivery more problematic. That can lead to more C-sections. “It becomes this sort of snowball effect,” said King, who is now medical director of maternal-fetal medicine at Riverside Methodist Hospital in Columbus, Ohio.

The age of mothers could be a factor, too. More women are giving birth in their late 30s and 40s, when complications risks are greater.

Other characteristics of the maternal mortality rate include:

– Race: Studies have found that the maternal death rate in black women is at least three times greater than is it is for whites. Black women are more susceptible to complications like high blood pressure and are more likely to get inadequate prenatal care.

– Quality of care: Three different studies indicate at least 40 percent of maternal deaths could have been prevented.

Sometimes, there is no clear explanation for a woman’s death.

Valerie Scythes, a 35-year-old elementary schoolteacher, died in March at a hospital in New Jersey – the state with the highest Caesarean section rate. She had had a C-section, as did another teacher at the same school who died after giving birth at the same hospital two weeks later.

However, Scythes died of a blocked blood vessel and the other woman died from bleeding, said John Baldante, a Philadelphia attorney investigating the death for Scythes’ family.

“I’m not sure there was any connection between the two deaths,” Baldante said.

Also mysterious was the death of Tim Davis’ 37-year-old wife, Elizabeth, who died a day after a vaginal delivery at a Danville, Va., hospital in September 2000.

She had a heart attack after a massive blood loss, Davis said. It’s not clearly known what caused the heavy bleeding. There was no autopsy, he said, a decision he now regrets.

“Nothing led us to believe anything was wrong with this pregnancy. She was like a picture of health,” he continued, noting she had been a YMCA fitness instructor.

A lawsuit against the hospital ended in a settlement. Davis also sued the obstetrician, but a jury ruled in the doctor’s favor.