Rattlesnakes are showing up in some unusual places here 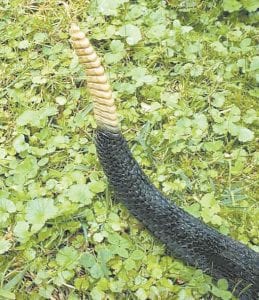 Copperheads are always common in the eastern United Stated, but wet weather this year seems to have brought them — and rattlesnakes — out of the woodwork.

Residents are reporting timber rattlers all over Letcher County. While there are normally reports of rattlesnakes a handful of times a year here — usually on isolated hiking or four-wheeling trails — this year they’re being seen commonly in front yards and other places where human activity normally keeps them scared away.

Two large rattlesnakes were killed in yards at McRoberts in the past week. One was killed when a passerby saw it crawling into yard of Angie Hardin’s elderly parents.

“They said it was 42 inches long and had 14 rattles and a button,” Hardin said.

Pictures circulating of another timber rattlesnake killed on 15 Hollow showed 16 rattles. Contrary to myth, the number of rattles does not indicate a snake’s age. They can grow as many as three rattles a year, and often lose rattles when they get caught on rocks and brush in the wild. 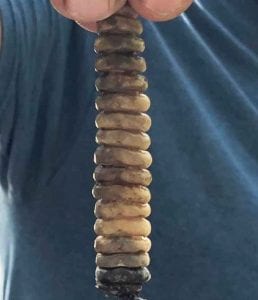 “ Normally, a rattlesnake in the wild has a broken string,” said John MacGregor, a snake expert with the Kentucky Department for Fish and Wildlife resources.

MacGregor said that while it may seem like there are suddenly more snakes, if they’re adults they’ve been around for a while. Copperheads live 12 years or more in the wild, and rattlesnakes can live 15 to 20 years in the wild and take five years to mature. They’ve been known to live 30 years in captivity, according to the National Zoo.

Chris Caudill, a Letcher County constable, Whitesburg city manager and a volunteer tour guide for the Letcher County Tourism Commission, said he’s seen and heard of several rattlesnakes this year, though a knee injury has prevented him from getting into the woods as much as he normally would.

“I see them on these abandoned strip mines,” Caudill said. “I haven’t gotten to hike as much, but several people have said they’ve seen them at Bad Branch Falls.”

This timber rattlesnake was killed last week in the yard of Carl and Colleen Little Franklin at McRoberts. “My brother Les Little killed this in my yard today,” Mrs. Franklin posted to her Facebook account on June 16. “Big thank you for that.” Sightings of poisonous snakes appear to be up in Letcher County this year.

Bad Branch, a state nature preserve, has long had a sign near the falls telling hikers they are in “rattlesnake habitat.”

While it is difficult to mistake a non-venomous snake for a rattlesnake, people regularly mistake the non-venomous Northern water snake and rat snake for copperheads. The rat snake, commonly called a black snake, often has patterned scales, but that is where the similarities end. A rat snake can be several different colors, but it is a slender snake whose head is not well defined from its body. The Northern water snake is colored very similar to a copperhead, but the bands around its body are wide across its back and narrow on the sides. A copperhead has hourglass shaped with the narrow section across the back, and the wide sections on the side. 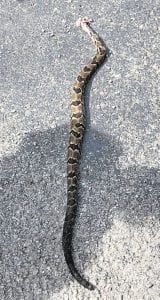 A second timber rattlesnake was killed at McRoberts on Sunday. Angie Collier Hardin said the 42-inch snake had 14 rattles and a button and was killed by James Johnson as it tried to make its way into her parents’ yard.

“Looking at it from the side, it looks like a Hershey’s kiss,” MacGregor said.

Both copperheads and rattlesnakes are pit vipers. They have well-defined heads with narrow necks and broad, flat triangular heads, with a pit on the side of the nose that is used for sensing temperature. Their eyes have vertical pupils like a cat. Copperheads, as the name implies, have reddish-brown heads, and juveniles have yellow tails that they use as bait to get prey to come closer.

Rattlesnakes have a much more potent venom than copperheads, and if a person is bitten, the cost of antivenin alone can cost upwards of $150,000. Even so, only about 5 percent of rattlesnake bites are fatal if treated, MacGregor said. He said the last two rattlesnake bite deaths in Kentucky were years ago, and both were preachers bitten during snake-handling services.

“Even if you’re a snake handling preacher and you refuse treatment, 95 times out of 100, you’re not going to die,” MacGregor said.

If you are bitten by a snake, wash the wound with soap and water, keep the bite below your heart, and get to a hospital. Do not cut the wound, do not use a tourniquet, and do not attempt to suck out the poison. All of those things, which at one time were accepted first aid for snakebite, are more like to cause the injury to be worse. Try to determine what kind of a snake bit you, but don’t try to catch it to find out. If you don’t know what kind it was, the hospital will still treat you.

Of course, the best treatment is not to get bitten to begin with. A Tennessee man was bitten by a baby pygmy rattler earlier this month when he picked up a piece of sheet metal that had been lying flat on the ground. The snake was under it, and he nearly lost a finger. A Texas boy nearly died after being bitten on top of his bare foot.

Bare feet and bare legs make it more dangerous to be in areas where snakes can hide, such as forests and rocky areas, but as this year proves, snakes aren’t always where you expect them. Park rangers found a rattlesnake lying under the edge of a boardwalk on the beach at Cape Hatteras National Seashore.

MacGregor said snakes normally lie still or move away when a person approaches. If one doesn’t, give it plenty of room. Mac- Gregor said rattlesnakes may give a warning rattle, and if you slowly step backwards away from it, it will most likely give one more warning and leave too.

“They may make one little twitch with their tail — kind of like pumping a shotgun,” MacGregor said.