Raw eggs and all: What you need to know

“You can’t own a restaurant and call yourself a chef if you’re using mayonnaise out of a bottle,” —Charles Reeves, chef and owner of Penny Cluse Cafe

By JIM ROMANOFF
For The Associated Press 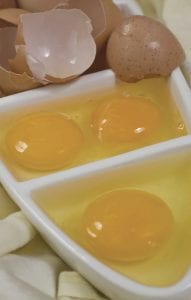 This photo taken Feb. 17, 2010 shows a dish of raw eggs. While many food experts maintain that eggs need to be fully cooked to be safe, professional chefs and home cooks alike safely use raw eggs as ingredients in a variety of recipes daily. (AP Photo/Larry Crowe)

Is it any wonder Americans are jittery about their food? So much so that when The Associated Press recently ran a recipe for traditional spaghetti carbonara — complete with its only barely cooked egg — e-mails poured in.

Had we forgotten the step in the recipe about cooking the egg?

No. But it did make us wonder. With so many traditional recipes calling for uncooked egg — mayonnaise, Caesar salad, eggnog, carbonara, never mind the simple joy of dunking toast in softboiled eggs — what can we safely do with raw eggs?

Simply put, raw eggs can carry salmonella, bacteria that can cause serious food poisoning, even death. But to be fair, any raw food can be contaminated. After all, salmonella is what triggered the massive peanut butter recall last year.

The Food and Drug Administration is pretty clear on the matter, telling people eggs should be fully cooked until both the yolks and the whites are firm. They tell people not to eat or even taste any foods that may contain raw or undercooked eggs.

Of course the risks are highest among the very young, the very elderly, and people who are pregnant or have a compromised immune system, says Catherine Donnelly, a professor and expert on the microbiology of food safety at the University of Vermont. Healthy adults may get sick from salmonella, but Donnelly says they are unlikely to die.

Still, not dying is a pretty low bar to set for dinner. Is it worth it?

Charles Reeves, chef and owner of Penny Cluse Cafe, a restaurant in Burlington, Vt., known for its from-scratch breakfasts and lunches, certainly thinks so.

“You can’t own a restaurant and call yourself a chef if you’re using mayonnaise out of a bottle,” he says. “It’s just too easy to make it better yourself.”

In Reeves kitchen, the ubiquitous dressing (made with raw yolks and sometimes the whites) is prepared daily and used on numerous sandwiches. Raw eggs also show up in the base for several other dressings and sauces.

Though his customers’ safety is a primary concern, Reeves doesn’t think twice about using raw eggs, including serving them over easy and sunny side up.

“You just always have to use absolutely fresh eggs that come from a reputable source,” he says.

“Bacteria are blind,” he says. “They don’t see whether the eggs come from a local farmer or are free-range or organic.”

Much depends on how the eggs and chickens have been handled, says Pritchard. An unhealthy chicken can have salmonella in its reproductive tract and the bacteria can end up on the shell or even inside the egg.

Luckily, says Donnelly, the egg industry got serious during the ‘90s about salmonella.

Still, Pritchard says an egg also can be contaminated by an external source in the barnyard or during the handling and shipping, including during storage or preparation at a restaurant.

That’s part of the reason California and New Jersey during the ‘90s banned raw and undercooked eggs from restaurants.

In both states there was a considerable outcry in favor of runny eggs, and the laws were quickly revised to make it easier for raw and undercooked eggs to be served so long as customers are informed of the risk, either on the menu or by a server.

But all of that focus on food service frustrates Nancy Oakes, a James Beard award-winning chef and owner of San Francisco’s Boulevard Restaurant. She calls the raw egg a “simply magical food.”

At Boulevard, Oakes creates aiolis with raw egg yolk, and accompanies her Caesar salad with a soft-cooked egg on the side. She says safety efforts focus too much on the kitchen, and not enough on the farms where the eggs are produced.

“It just seems that (the regulators) spend their entire lives trying to make safety happen in the frying pan rather than at the farm gate or in the transportation systems where a lot of the problems originate,” she said.

And chefs like Gabrielle Hamilton, owner of Prune restaurant in New York, has no problem with raw and undercooked eggs as long as customers are aware of what they are ordering.

“I use them like crazy, for breakfast, lunch and dinner,” said Hamilton, who added that raw or runny yolks are indispensable for adding richness, as well as for balancing out spicy or acidic foods.

According the American Egg Board, the risk of an egg being contaminated with salmonella is only around 1 in 20,000. At this rate, an average consumer would encounter a contaminated egg once in 84 years.

Pritchard says that for an individual, assessing the risks of consuming raw eggs isn’t so cut and dry. While it’s true that the likelihood of being sickened by an egg is low, it doesn’t matter, he points out, if you’re the one who gets sick.

“It really all depends,” says Pritchard, “on the immune status of the individual and the source of the egg.”

So what’s an egg eater to do?

For adult home cooks in good health, the minute risk of being sickened may be worth the joy of soft boiled eggs or homemade mayo. Ditto when dining out.

Still not so sure? Pasteurized egg products are available. Whites are common, but yolks are hard to find. But there’s a catch. Many of these products are made mostly from egg whites, which don’t emulsify or thicken well, so they won’t work well in most dishes that call for raw whole eggs or egg yolks.

There are pasteurized whole eggs that are heated in the shell in a low-heat water bath that neutralizes bacteria, but stops short of cooking the egg, but these can be hard to find.