RC plant was Bradley Bentley’s since ’47 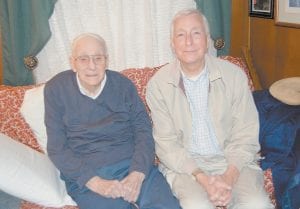 Bradley Bentley, 96, and his son, Ronnie Bentley, 73, posed for a photo Nov. 4 on their last day as owners of The Royal Crown Bottling Company of Whitesburg Inc.

Just before Bradley Bentley bought his share of Royal Crown Cola’s Letcher County bottling plant in 1947, he was paying 80 cents for a case of 20-ounce bottles of RC Cola and selling coal from a small underground mine he owned for $3.50 a ton.

While much has changed in the 64 years since Bentley bought the plant in Neon and moved it to Ermine, one thing had remained constant until Monday — the 96-year-old Bentley showing up for work nearly every day. The record now shows that Friday, November 4, 2011 was the last day of work for the elder Bentley, his 73-year-old son, Ronnie Bentley, and six other employees who worked to keep the RC plant a viable business.

“We just all got too old to fight with it,” said Lottie Hampton, who has worked as the bookkeeper and secretary of the business for 48 years. 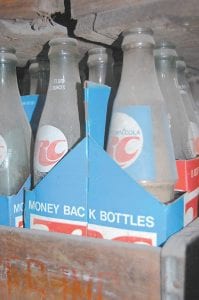 Ronnie Bentley estimates it would take two tractortrailer trucks to haul away all of the glass bottles (left) which have remained at the plant since bottling of RC Cola and Nehi fruit drinks ceased in 1990.

Before Bentley partnered with the late Ray Collins to buy the bottling plant, he owned the Big Block Coal Company on the Little Colly side of Sandlick Mountain. Collins was an Old Regular Baptist preacher and businessman. The two men bought the plant, then located in Neon, from James McAuley and formed The Royal Crown Bottling Company of Whitesburg Inc.

After taking over a plant with an inventory consisting of less than a pallet of the lemon-lime drink Upper 10 and one pickup truck that had been hit in the rear, Bentley sold his coal business in 1948 and he and Collins moved their bottling plant to Ermine where they built a brand new facility with new equipment. Collins sold his share of the business to Bentley in 1965.

In its heyday, the plant produced and bottled RC Cola, Diet Rite Cola, Nehi Peach, Nehi Grape, Nehi Orange, Nehi Root Beer, Upper 10, and RC 100. Between 2,000 to 2,500 cases of 12-ounce bottles and 1,500 to 2,000 cases of 16-ounce bottles of soft drinks were produced each day until 1990, when Bentley decided to stop bottling all products because the market was moving toward plastic twoliter bottles and aluminum cans. 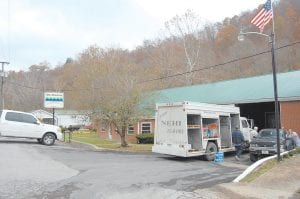 Workers were busy preparing for the transition of a new owner at the RC Plant at Ermine on Nov. 4. The Dr. Pepper Snapple Group recently purchased The Royal Crown Bottling Company of Whitesburg Inc., which has been in business since 1947.

“All we could produce was in glass bottles,” said Ronnie Bentley, who has managed the facility for the last several years. “We were only producing 10 percent of what we sold.”

Even though the Bentleys were producing fewer colas and sodas in 1990, it didn’t keep Bradley Bentley from being named the best bottler in the country by Royal Crown Cola.

“Everything they graded us on, he was the best,” said Ronnie Bentley. “We have the plaque to prove it. We were at the top of the mountain.”

When the Bentleys ceased bottling, they sold the plant’s big stainless steel tanks to Jack Looney of Highland Winery in Seco and began purchasing canned soft drinks from Louisville for distribution here.

At one point during his 64 years of owning the RC plant, Bradley Bentley employed 70 workers, 26 who manned routes to deliver his products throughout the region. Demand was so high the elder Bentley built warehouses in Hazard, Pikeville and Wise, Va., as well as three- and four-bedroom houses for employees to live in and run the warehouses. He also furnished trucks for them to drive. He also had bottling plants in Jackson until 1965 and in Paintsville until 1974.

As of last Friday, the business still had 700 or 800 accounts consisting of stores in Letcher, Knott, Leslie and Perry counties in Kentucky and Wise, Dickenson, Russell and Lee counties in Virginia.

Lottie Hampton speaks highly of Bradley Bentley and says he has been a great boss and a hard worker.

“He did whatever needed to be done,” said Hampton. “He didn’t tell someone to do something. He got out there and showed them how.”

When the plant still bottled drinks, Hampton said the elder Bentley would show up at the plant at 4 a.m. to fire the furnace so the water would be hot enough to clean and sterilize the glass bottles when workers arrived.

“Hard work that is all I have ever done,” said Bradley Bentley, who still signed paychecks. “Anything that comes up, we run it by him,” added Hampton.

Ronnie Bentley has helped his father at the plant since he was nine years old and carried wooden shelves for workers to fill with full bottles.

After graduating from Eastern Kentucky University, Ronnie Bentley was drafted into the armed forces in September 1961. He served two years and came back to home to work with his father. He has been working at the RC plant ever since.

“I enjoyed it,” said Ronnie Bentley. “I was helping my dad.”

Ronnie Bentley said the biggest change he has seen while working at the plant is the advancement in the delivery trucks.

“The trucks have changed tremendously,” he said.

Next came “deck trucks” which didn’t have sides, meaning that the bottles located on the sides got dirty. Now, side loaders with covered bodies are used so the drinks stay clean.

Ronnie Bentley’s son, Tyler, also worked at the plant loading trucks during his high school years and during summers when he was home from college.

“It’s a good business,” said Bradley Bentley. “It’s been a good one. We just couldn’t go any further.”

Since the Bentleys sold their plant, only one independent RC plant remains in Kentucky. It is located in Madisonville.

When asked if he was sad to sell the business, Bradley Bentley said, “You know I am.”

“He did a wonderful job until he wasn’t able to work,” said Ronnie Bentley. “I was able to do what I could until I no longer could.”

Asked what he will do now that he is officially retired as owner and president of the RC plant, Bradley Bentley began twiddling his thumbs and said he would like to visit people he hasn’t seen in awhile.

In 1960, Bradley Bentley came up with the idea of a well-known billboard that says, “Welcome to Whitesburg, Ky. Population 1,534 friendly people plus two grouches.” People have speculated for years about the identity of the grouches, but Bradley Bentley insists the billboard isn’t referring to anyone in particular. (The sign is located on Tunnel Hill at Whitesburg near the back entrance to Whitesburg Appalachian Regional Hospital.)

The Bentleys also own a second well-known sign across Business 15 from Southeast Kentucky Community and Technical College in Whitesburg (site of the old Coca-Cola Bottling Co.) that encourages students to be winners and stay in school.

Bradley Bentley isn’t sure whether the signs will stay untouched or if he will sell the land on which they are located.

Another uncertainty is whether Santa Claus and his reindeer will make their annual appearance this Thanksgiving. The Bentleys bought the large Christmas decoration while attending an RC Cola meeting in Chicago in the 1960s. It has been on display near the RC plant for more than 50 Christmas seasons.

. Some interesting facts: • RC Cola was developed in 1905 in Columbus, Georgia by pharmacist Claude A. Hatcher. It was originally called Chero-Cola before being reformulated by chemist Rufus Kamm in 1934 and released at Royal Crown Cola.

• The Nehi brand of fruit drinks was released in 1924 and became so popular the Chero-Cola company changed its name to the Nehi Corporation.

• Diet Rite, released in 1958, was the first diet cola sold in the United States. Royal Crown also introduced the first caffeine-free cola in the U.S., RC 100 in 1980.