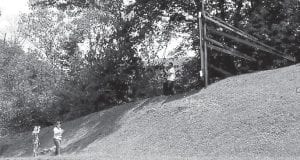 More people have been posing in front of the old RC Cola sign at the entrance to the Whitesburg hospital. (Photo courtesy Ryan Adams)

In the past few days Letcher County residents have been posting photos on Facebook of themselves posing in front of the billboard, which says “Welcome to Whitesburg, Ky. Population 1,534 friendly people plus two grouches.” The conversation piece has been located near the back entrance of the hospital since 1952 when Bradley Bentley, former owner of The Royal Crown Bottling Company of Whitesburg Inc., came up with the clever idea for the sign.

Rumors that the sign would be removed began last week after a story about the sign, its origin and its future appeared in an out-ofcounty publication.

Bradley Bentley and his son Ronnie Bentley deeded the piece of land the sign sits on to ARH in July 2012. In exchange, a room in the newest hospital wing is named in Bradley Bentley’s honor.

“We have no plans to remove that sign,” said Rachel Breeding, Whitesburg ARH education coordinator.

Members of the maintenance department recently completed a routine structural check on the billboard.

“That sign is sound and structurally strong,” said Breeding. “If that sign is ever removed it has to be a big event. That is a city landmark.”

Breeding said if ARH ever decides to remove the sign it would be done in a way similar as to when the old water tower was removed a few years ago. It was announced several weeks in advance and people gathered to watch it being taken down.