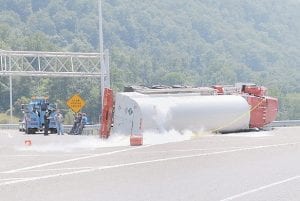 The highway warning sign in the left of this photo says “Slow moving hauling 3,000 gallons of super-cold liquid nitrogen when it overturned near Jenkins early Tuesday afternoon. Jenkins Police Chief Jim Stephens said no one was injured when the truck, travelling north on U.S. 23 attempted to turn left onto U.S. 119 and overturned in a poorly designed sharp curve that has traditionally been a hazard for truck drivers not familiar with the intersection. Stephens said traffic was held up for a short time following the incident while wreckers attempted to turn the truck over. Stephens said the liquid nitrogen, which is used in the “fracking” of natural gas wells here, presented no danger to the public.