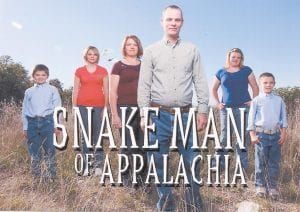 The world premiere of “Snake Man of Appalachia”, a television reality show featuring the Verlin Short family of Mayking, will air on Animal Planet at 9 p.m. on Jan. 12. Pictured from left are Mackenzie, Denishea, Reva, Verlin, Wanda and Jeremiah Short. At least five episodes of the show will air, producers say.

The world premiere of a reality show featuring a Mayking family and snakes will air tomorrow night on Animal Planet.

“Snake Man of Appalachia” follows Verlin Short as he attends church services where snakes are handled and catches copperheads and rattlesnakes in eastern Kentucky and West Virginia.

The show also captures Short’s softer side in scenes with his family. In the episode titled “Driving Miss Denishea,” Short is shown waiting outside the Letcher County Courthouse while his oldest daughter, Denishea, takes her driver’s permit test. He later tells her how important it is to finish high school.

Dan Sexton, executive producer of “Snake Man of Appalachia,” said even though the hook of the reality show is Verlin Short and his passion for snakes, the program is just as much about the rest of the Short family.

“There are a lot of heartwarming moments on the show,” said Sexton, owner of Dan Sexton Media. “This show might be more about the people than the animals.”

In another episode, Verlin Short’s wife, Reva, takes their other daughter, Wanda, to try out for the Whitesburg Middle School basketball team and cheers her on from the stands.

Verlin Short was filmed taking his son, Mackenzie, snake hunting and was proud when Mackenzie caught a non-venomous milk snake.

Reva Short, who isn’t too fond of snakes, was filmed on a different snake hunting adventure with her husband as she fought her fears while she helped him catch a rattlesnake.

Sexton met Verlin Short in 2002 while producing a documentary about snake handling for the Travel Channel. Sexton decided there is public interest in the religious ritual and wanted to further explore the topic as well as introduce the Short family to the world.

A film crew first shot footage of the Short family for the pilot episode in the spring of 2010. Animal Planet ordered five more episodes and the sevenperson film crew came back to Letcher County in the fall of 2010 to shoot the extra footage. At the time of filming Denishea was 16, Wanda was 13 and twins Jeremiah and Mackenzie were eight.

Sexton said Animal Planet was waiting for the right time to air “Snake Man of Appalachia.”

“This was a high profile show for them,” said Sexton, who is hopeful the show will be picked up for a second season. “It’s the best project of my career — emotionally and professionally.”

Sexton said he and the camera crew grew attached to the Short family and to Letcher County.

Some of the crew members, who are in their twenties, rented apartments in downtown Whitesburg and dined in local restaurants. A couple even participated in a downtown marathon.

When asked how the reality show addresses Appalachian stereotypes, Sexton said he and the other producers tried to be respectful of the Shorts and the area.

“What you see is what you get,” said Sexton. “We didn’t try to exploit anything.”

The show also tackles the issue of Verlin Short wanting to legally practice his hobby. During the course of the six episodes Verlin Short pursues the idea of obtaining permits to collect more snakes and to legally transport the reptiles.

Short pleaded guilty to seven counts of illegally buying, selling and transporting reptiles. He was fined $100 for each of the counts and did not receive any jail time for the offenses.

Pigman is filmed in a couple of episodes of “Snake Man of Appalachia” making sure Short is caring for the snakes properly and doesn’t have more than the law allows.

Short’s attorney, Matt Butler of Whitesburg, also plays a small role. Butler, who is scared of snakes, said Short is knowledgeable about snake handling in addition to being respectful of snaking and taking great care of what he catches.

“It’s kind of his mission for everyone to see what he does,” said Butler. “I think he is real proud of it.”