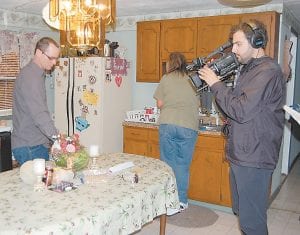 FILMING A ‘PILOT’ — A cameraman filmed Verlin Short on May 11 as he cleaned the kitchen table and his wife, Reva, washed breakfast dishes. The couple as well as their four children will be featured in a pilot on Animal Planet in about six months. The show will explore Verlin Short’s hobby of catching snakes. (Photo by Sally Barto)

A Mayking family could be featured on a reality show on Animal Planet if the pilot episode is successful.

A camera crew started filming Verlin Ray and Reva Short washing dishes and cleaning their kitchen at 49 Cleo’s Loop at Pine Creek Tuesday morning after their four children had left for school. The seven-person crew will follow the Letcher County family for the next week and a half.

Co-executive producer John Eric Streit, who served as co-executive producer for TLC’s “Little People Big World” for four seasons, said the pilot episode won’t air on Animal Planet until at least six months from now. Streit said if the pilot episode does well with ratings, the Shorts may land their own TV series for which a title has not been chosen.

Verlin and Reva Short, of Mayking, have agreed to star in a pilot for a reality show on Animal Planet about Verlin Short’s love of snakes and his family. A camera crew will be filming the family’s daily activities until about 10 p.m. each night for the next week and a half.

So if the Shorts are “regular” people, why would Animal Planet be interested in airing a show about them?

“The father happens to collect and catch snakes,” said Streit. “His hobby is rare. His lifestyle and family are very typical. They are a normal family. They have normal day-to-day struggles.”

Streit said people are curious about people who handle snakes and want to know more.

“Verlin has had issues with the law based on his faith,” he said. “There is freedom of religion. We know he wants to practice his hobby legally. Part of this show, he is going to explore how to do that.”

In November 2008, Verlin Short, a coal miner, pleaded guilty in Letcher District Court to seven counts of illegally buying, selling and transport- ing reptiles. He was fined $100 for each of the seven counts and was ordered to pay $130 in court costs. Short received no jail time for the off enses.

Dan Sexton, executive producer of the Shorts’ pilot, met Verlin Short in 2002 when he produced a documentary about snake and serpent handling for the Travel Channel.

Sexton said he doesn’t know what all will be filmed this week because the show isn’t scripted. He said if Verlin Short wants to drive to West Virginia this weekend to a church that practices snake handling then the camera crew will follow along.

While a part of the show will focus on Verlin and his snakes, his wife and his children will be featured quite a bit in the show.

“It’s about the day-to-day struggles of raising a family in a changing world,” said Streit.

The couple’s 16-year-old daughter Denishea, who attends Letcher County Central High School, has a boyfriend and may get her driver’s license soon. Thirteen-year-old Wanda Alice, who is a seventh-grade student at Whitesburg Middle School, enjoys helping her mom cook. Eightyear old twin boys Jeremiah and Mackenzie, who attend West Whitesburg Elementary School, like to wrestle each other and give their siblings a hard time.

In a cast tape labeled “Charmed Life”, the family enjoys a trip to a bowling alley. Wanda Alice helps her mom fix hamburgers, while Denishea decides she would rather eat a pizza. She ends up talking to her boyfriend, forgets to check on the pizza crust and opens the oven door to find a burnt pizza.

Verlin Short is shown catching snakes in the woods and removing snakes from his “snake house.” His children are shown holding and petting the snakes. Verlin Short talks about his dream of earning a zoology license so he can educate others on how to handle snakes.

“Story lines are so endless with this family,” said Sexton. “The best reality shows are reality. We think it will be interesting enough to want to see more.”

Streit said if the show is picked up by Animal Planet then it could be on for several seasons.

“If we are successful and do a good job, we could be here long term,” said Streit. “We want to build good relationships with the community.”

Streit and Sexton are hoping they can portray Letcher County in an optimistic way. They are aware of bad stereotypes and how eastern Kentucky has been portrayed in previous television documentaries and shows.

“We’re hoping we can buck that trend and do a positive piece and get people interested in this family,” said Streit. “We’re not here to dwell on poverty.”

Streit said the show is n’t intended to make people from this area look stupid.

“Unequivocally, the answer is no,” he said. “What we don’t want to do is perpetrate a stereotype.

Streit, who lives in Paducah and has family in Barbourville, said a camera crew will spend a few days filming nothing but landscape and “beauty shots” of the area.

“We want to be open and honest and let people know we are here,” he said. “We aren’t here to make anyone look bad.”

Verlin Short said he agreed to shoot the pilot to “let everyone know we are the same as everyone else. We aren’t any diff erent than people who live in a big city.”

“I’d just like everyone to know that it isn’t going to be anything to put anyone in the county down,” said Verlin Short.

“The proof is in the finished product,” said Sexton, whose mother lives in Owsley County and whose father lives in Rockcastle County.