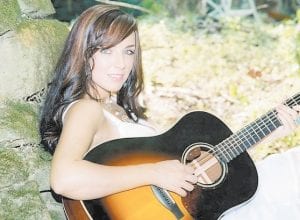 On Saturday, Aug. 18, Coca-Cola and the City of Whitesburg will present two-time Grammy award winner Rebecca Lynn Howard in a free concert at 9:30 p.m. at Riverside Days.

Howard, a native of Salyersville, has had success as a musician, songwriter, and producer. She first hit the number one position on the adult contemporary charts in 2002 with “Simple Things”, a song with Jim Brickman.

She also has had success in country music with her signature hit, “Forgive.”

Her style of music is described as “deep-rooted, front porch bluegrass and mountain music, to country, to pop, to heavy power punk rock, and most everything in between.”

As a songwriter, her songs have been recorded by Martina McBride, Trisha Yearwood, Clay Aiken, Julianne Hough, Jessica Andrews, Kentucky native John Michael Montgomery, and others.

One of Howard’s recent projects is working with Australia’s 2009 Female Vocalist of the Year, Dianna Corcoran. Howard co-produced the record and penned the largest portion of the songs on new album “Keep Breathing”, which has already scored three multiweek #1 singles.

Howard returned to Salyersville to visit in the aftermath of a devastating tornado, but did not want publicity for her work. It was that point that the festival committee knew it wanted Howard to headline this year’s festival, said Flint.

Other popular Riverside Days events include the Whitesburg Duck Race on and the nightly Mountain Outreach Idol competition.