The Letcher County Recreation Center, pictured at dusk Sunday, was designed by Summit Engineering of Pikeville and built on the old A&P grocery site in Whitesburg.

How many times have you heard someone say there isn’t anything fun to do in Letcher County? Soon the Letcher County Recreation Center will open its doors offering several options for fun and entertainment.

“We tried to build it to serve everyone,” said Letcher County Judge/Executive Jim Ward. “If we can guide our youth in the right direction instead of letting them go down the wrong road, hopefully they will become successful citizens.”

For the young who are adventuresome, the center features a 34-foot-tall climbing wall modeled after Pine Mountain that can be seen from the front of the $7 million building. The climbing wall features 12 different paths for climbers to attempt. A photograph of Pine Mountain was used as a reference when the wall was designed and painted by employees of Eldorado Climbing Walls in Boulder, Colo.

“It’s the only climbing wall in the state east of Lexington,” said Letcher County Parks and Recreation Director Derek Barto. 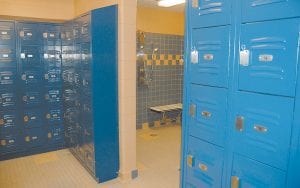 In photo at right, lockers and showers can be seen in the men’s locker room.

The center’s gymnasium is made up of three 70-foot basketball/volleyball courts that can be blocked off with dividers. The gym is designed to also serve as an emergency shelter during natural disasters. Bleachers will be added in December.

The center’s six-lane bowling alley has a large projection screen with a sound system and DVD player. During cosmic bowling the lanes will light up with 60 black lights.

A concession stand and an arcade are also located downstairs.

Upstairs in the 43,000-square-foot building is a walking track that wraps around the gymnasium and exercise area. At least eight treadmills overlook the gym floor. 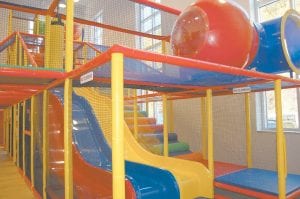 The indoor playground is 2-1/2 stories tall and contains a triple slide, an obstacle course, a separate area for toddlers and an enclosed spiral slide.

Batting cages will be located on the side of the building.

Barto, Ward and others visited eight recreational facilities in Kentucky to gather ideas before construction started on the Letcher County facility.

Summit Engineering of Pikeville designed the center, which is located beside Dairy Queen on the former site of the old A&P/United Super grocery building. A groundbreaking ceremony was held on March 17, 2010.

“We wanted a building that people will want to come to,” said Barto. “You drive by at night and wonder what all is in there.” 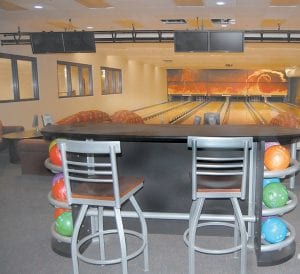 The six-lane bowling alley (above) has a large projection screen with a sound system and DVD player. During cosmic bowling the lanes light up with 60 black lights. The bowling alley is also stocked with shoes to fit young children and adults. Pictured below is a kid’s size nine shoe and a men’s size 12 shoe.

The recreation center will be well protected.

In addition to the police agency Letcher County Rangers being stationed there, the center will have a 32-camera security system.

“We’re not going to put up with anything — drugs, fights,” said Barto.

Coal severance tax money is being used to pay for the building’s construction.

“Between our corporate sponsorships and membership fees, yearly operational costs will be met,” Barto said. “We used geothermal (heating and cooling) to save on energy costs. That’s going to help keep our operational costs down.”

The county will employ at least 15 people at the recreation center. The parking lot in front of the center has 115 parking spaces.

A ribbon-cutting ceremony and open house are set for 4 p.m. on Oct. 22, but the center will not be open for business for a few more weeks. Party rooms will be rented out beginning Oct. 28. 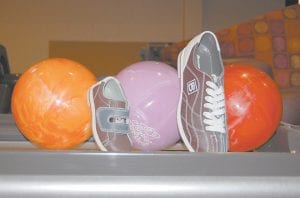 “We deserve as much as everyone else and this is one way of doing it,” said Ward.

The Letcher County Recreation Center’s gymnasium, right, is made up of three 70-foot-long courts.

Red dividers can separate the courts or it can be used as one full court. The courts can be used for basketball or volleyball.

The gym can also serve as an emergency shelter during natural disasters. 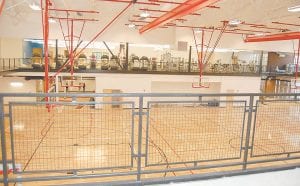 Shown in the backgroud of the photo is exercise equipment, including eight treadmills, which are located in the exercise area which overlooks the gym. Letcher County Parks and Recreation Director Derek Barto said the fitness equipment is all top of the line equipment manufactured by Cybex International.