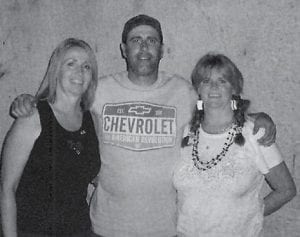 RECEIVES MEDAL – Technical Sgt. Shawn Damron, with the 791st Missile Security Forces Squadron stationed at Minot Air Force Base in Minot, N.D., has been in the Air Force almost 20 years. He is a 1985 graduate of Jenkins High School and is the son of Jackie Damron of Jenkins and Doug Damron of McRoberts. He recently received a commendation medal for developing a mobile radar surveillance and detection system to be used in protection of Intercontinental Ballistic Missile systems, saving the Air Force hundreds of thousands of dollars. Pictured with him are his sisters, Betsy Addington of Burdine (left), and Lisa Wiley of King, N.C., who visited him for his 40th birthday on July 4. They also toured the Air Force base and a buffalo ranch and visited the International Peace Gardens in Canada. Also making the trip were nieces Samantha and Brittany Wiley, and Summer Powers and husband David and son Bryce of Jenkins.