Recliner makes for a good story

Last Monday evening as I was beginning to get my column together, I started feeling a pancreatitis attack coming on. Needless to say I didn’t have an entry last week and that’s why there are a lot of pictures in the column this week.

Thanks so much to the nurses and staff at Whitesburg hospital once again, especially my ER nurse, Donovan Mchone. He was one of my former students, and it feels so good to have familiar faces taking care of you when you are in pain and sick.

I want to thank Eugene and Lindy Mullins Yonts for sharing their Thanksgiving Day dinner with us. It was so good to just be together again. With or without the food, it would have been a very special day. We always have our Thanksgiving at Mom’s on the Friday after Thanksgiving Day so as not to interfere with being able to eat with our in-laws on Thursday.

Another thing I was going to do in last week’s column was tell you one of the best and most hilarious tales on my sister Delores, since it was her birthday. This one will take awhile and you will just have to visualize it to get the full effect. You might think I’ve made this one up, but I promise this is a true story. 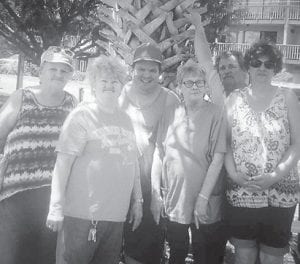 David Mullins with his mother, aunts and uncle.

It was the year 2001 (I think) and Mom had fallen and broken her right hip. Dad called the ambulance and they came and were taking Mom to the hospital. As it turns out my husband and I had a used recliner we were delivering to Mom and Dad that same evening without knowing she had fallen. So, we got there with the recliner and Dad comes out and meets us and says, “Dorothy has fell and they are taking her to the hospital. I need you all to take me and meet them there.”

Yonts and I unloaded the recliner and pushed it just inside the living room door and left it there. Mom had to stay in the hospital for quite a while. And for those of you that don’t know, my Dad was absolutely helpless when it came to taking care of himself. My sister Delores was the only one that could stay with him since the rest of us were working or too far away. 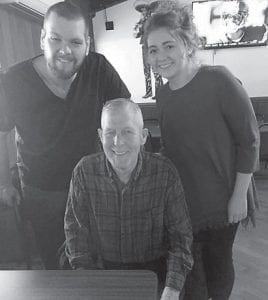 George Mchone with two of his grandchildren, Donovan Mchone and Haley King. This photograph was taken one year ago.

Well, there was something about the recliner that we never thought to mention because we had no idea anybody was going to be sleeping in it. That little piece of information that neither Daddy nor Delores knew was that the recliner had a tendency to flip over backwards if it was reclined all the way out. I guess you can just about guess where I’m going with this. Yep, Delores decided to sleep in the recliner. It was still in the same place we had left it, pushed just inside the door, between a coffee table and a side table.

At some point during the night the recliner did its trick and went backwards with Delores lying in it. I can just see her face when it happened and it still makes me laugh. I wasn’t there mind you, but between Delores and Daddy and their talent of storytelling it seems as if I was there.

She tried to roll off to either side, but remember, the tables were blocking her. She tried her best to yell for Daddy and wake him up, but after doing that for a while with no success she gave up. She then thought if she could pull the curtains back and get the dog to come to the door, she would bark loud enough to wake Daddy up. I really don’t know how long she laid like that, but she was getting very short of breath. Finally, Daddy got up and came to the recliner in his underwear. She looked up at him and said, “Daddy, I’ve laid here till I can’t hardly breathe; I’m sure I’ll be alright until you go get some pants on!” My Daddy’s version of this tale from his point of view was even more hilarious. 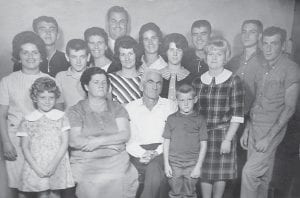 The Bill and Cindy Howard family.

For those of you keeping up with Mommy’s progress after open-heart surgery, we finally got her to complete a full session of cardiac rehab. The first time we went after she went through the evaluation and actually started walking her heart rate was way too high, so they stopped her and she had to see her cardiologist to okay it. We finally got all that cleared up and so Monday we went back and she did fine and has another session Thursday. When she is through with all that she will be able to go back to the rec center to exercise and senior citizens to socialize. Her friends will be so happy to have her back.

For those of you who haven’t had a chance to drive through Whitesburg and check out the Harry M. Caudill Library windows, you are missing out on a treat. Tyler Watts has once again wowed our community with his talent. There are six Charlie Brown characters made with 10,000 Post-it notes. Peanuts has always been one of my favorite comic strips, and also the Christmas movie. I love when Linus tells Charlie Brown what Christmas is all about by quoting the Bible.

There are other things to see in our community at this time of year as well. There are many beautifully decorated homes all over, but the roads I travel are surely worth the trip — Little Colley, Isom, Sandlick, Thornton and Colson to name a few. I took my granddaughters, Story and Drew Eden and one of Drew’s friends, around Friday night and they were in awe.

David will gladly let you know he turned 37 years young. He is such a joy to be around. When he proudly told us Monday was his birthday, Connie Adams had to sing ‘Happy Birthday’ to him and he was tickled pink while she sang it. I later sang it to him and he tried his best to talk me down.

Speaking of senior citizens, on Monday I heard some of the best news ever. Estel Taylor, who has been in our prayer requests, got some good news Friday. He doesn’t have to go on dialysis. We thank God for answering that prayer for sure.

People who still need our prayers are Faye Martin with heart problems; my aunt Linda Hall has major problems with her feet related to diabetes; our daughter Joy Hampton has been having back problems; my brother-in-law, John Graves, had shoulder replacement surgery last week; and my sister-inlaw, Tonya Tackett, had gastric bypass surgery last week. Also needing our prayers are all those who have lost loved ones, especially my pastor, Bill Jones and his wife Sandy. Getting through the Christmas season without those loved ones is unbelievably hard.

In getting Mom’s Christmas decorations out I ran across a lot of her older cards and letters. So many were from her dear friend, Oma Hatton. I found lots of birthday cards she had sent Mom. Oma would have turned 88 this past November, and if she were alive she would still be ending her column by begging everyone to please attend church Sunday.

I found the picture of the Howard family on Facebook and I thought it would be a good one to use to commemorate her birthday.