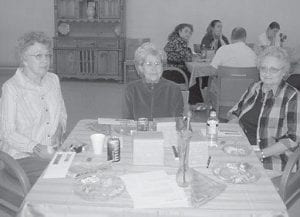 Volunteers at Letcher Manor Nursing Home were recognized recently with a social. National Volunteer Appreciation Week was April 20-24. A special award was given to Ruby’s Music, a group which plans to retire this year after volunteering for 15 years at the nursing facility. Pictured are Ruby’s Music members Patty Majority, Ruby Caudill, and Esther Corello, who have brought music and song to Letcher Manor patients.