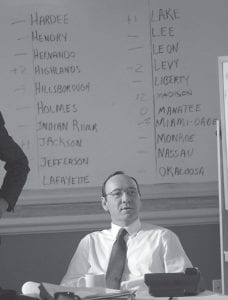 Kevin Spacey portrays Ron Klain in a scene from the docudrama “Recount,” a behind the scenes account of the 2000 presidential election scandal now airing on HBO. (AP)

Political operatives who were involved in the most dramatic election of our lifetimes say HBO’s “Recount” brings back the intensity.

Not all the details are perfect in the made-for-TV movie that condenses the 36 days it took to decide the 2000 presidential election into two hours, and Republicans aren’t thrilled that their opponents come across as the film’s heroes, but the consensus is the filmmakers summed up the spirit of the events that had the world on edge.

“Maybe it was little bit like somebody who was at Pearl Harbor watching a movie about Pearl Harbor,” said Mac Stipanovich, a Republican lobbyist who advised then Florida Secretary of State Katherine Harris during the recount.

Mitchell Berger, a lawyer on then Vice President Al Gore’s team, had a similar reaction.

“I was there 35 days and there were moments that were kind of hard to watch again,” Berger said immediately after the lights came up at a “Recount” premiere in Jacksonville. (The film began broadcasting on HBO on Sunday, and will air again this week at 9 a.m. and 7 p.m. on Thursday; and at 9:30 a.m. and 8 p.m. on Saturday. It will also air June 4 at 2 p.m. and 10 p.m.)

Still, Berger had praise for the movie as he stopped to talk to director Jay Roach on the way out of the Florida Theatre, saying: “It’s a fabulous synopsis. I think you captured the essence.”

The audience at the Florida premiere sometimes laughed at dramatic times, not because the scenes were funny, but because they were immediately recognizable.

“I could feel the anxiety in a weird way that I sort of always hoped the film would create,” Roach said. “It was a dysfunctional process. It did go off the rails, and people should feel upset by that.”

The movie largely takes the viewpoint of Ron Klain, a former Gore chief of staff who represented him in Tallahassee during the recount.

It captures most of the twists and turns of the disputed election, beginning with Palm Beach County’s butterfly ballot, which was blamed for people mistakenly voting for third-party candidate Pat Buchanan instead of Gore, and ending with the U.S. Supreme Court decision to stop the recount – resulting in George W. Bush’s 537-vote Florida victory over Gore.

It uses actual news footage showing networks calling the election for Gore, then later for Bush and ultimately as too close to call. It also sums up court cases, behind-the-scenes strategy, debates on whether hanging and dimpled chads could be counted as votes and Democrats’ efforts to buy more time to examine ballots as Harris certified the election for Bush.

Roach acknowledged that filmmakers chose the side of the underdog, but said they also did their best to fairly portray the Republican perspective. Screenwriter Danny Strong did dozens of interviews with people on both sides. He also reviewed books, news stories and court documents.

“By staying as close to the truth as we possibly could, it remains a very, very compelling story. You almost couldn’t make it up to be more suspenseful,” Roach said. “It just got more intense and more surreal as it went on. It just didn’t seem possible you could go that long without knowing who won that election.”

As could be expected in an effort to recreate history that was outside the public eye, some liberties were taken.

Former House Speaker Tom Feeney said he did not meet with Republican lawyers to discuss a plan to have the Legislature name the state’s electors for Bush. And even if he had, the filmmakers had his choice of drink wrong, he said.

“They had me pouring a bourbon instead of a Budweiser,” Feeney joked.

“The notion that there was a conspiracy between me and the Bush campaign, that’s one of the short cuts they made,” Feeney, now a congressman, said more seriously.

And while she hasn’t seen the movie, Harris took exception with her portrayal as it was described to her. Actress Laura Dern largely portrays her as ditzy and self-centered. In one scene, former Secretary of State James Baker watches Harris’s first news conference after the election and says: “This woman is hopeless. We’re going to need some help on this.”

That’s when Stipanovich is called to advise her. The film shows Stipanovich and then- Division of Elections Director Clay Roberts telling Harris what she should do. Harris said Stipanovich was never with her when she and her legal team made final decisions, but only helped her write some press statements.

Craig Waters, the Florida Supreme Court spokesman who emerged before the circus scene in front of the court to give updates, found both reality and some exaggeration during the film.

When Waters first saw an actor step out on the steps where he made his announcements to the world nearly eight years earlier, he smiled and said, “That’s the actual podium. We found it in the basement.” A few seconds later, as the actor speaks, Waters adds with a serious expression, “I never said that.” He goes further to explain the dialogue was in the court opinion, but not in his statement.