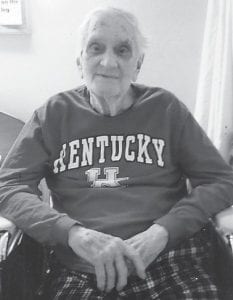 My name is Karen Vanover, and my daddy is Everett Vanover. I wanted to write to let you know how he is.

On the 19th day of December, he fell while going out to get his paper. I found him on his porch at 7 a.m. He had been lying out for quite awhile. It was 35 degrees. Broke my heart.

I got blankets and pillows to cover him. He kept saying his left leg hurt. I called the paramedics, and they arrived quickly.

We got to the emergency room fast, and after x-rays, found out he had fractured his left hip. The next morning he had a rod put in his thigh and put back pieces to his hipbone.

His memory started fading the first night. Just little things . . . And he is continuing to think he is in the military and “head honcho” of the rehab place he is in.

I try to visit him every other day. I saw him this morning, and they are releasing him tomorrow at noon.

We (my sister Tammy, mostly) have ordered things at home that he will need. We know that if he’s home, his memory will come back to him.

I know that he misses writing stories for The Mountain Eagle, and he misses talking to his “buddy” Pam.

He sees his surgeon on Tuesday, and I will try to keep you informed on how he is doing.

He talks a lot about my Mamaw and Papaw, being at Cane Branch, leaving the hollow and going off into the military, marrying Momma and how much he loves us eight kids. (He did say a few times that I was his favorite, and he was closest to me.)

Thank you all for the prayers and the love you give him. It means so much to him and me.