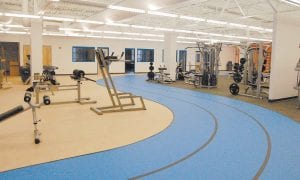 READY TO GO — A cushioned walking track was installed last week and then painted blue at the Letcher County Recreation Center in Whitesburg. The center will open for business on Nov. 19. (Eagle photo)

Letcher County residents will soon be able to start exercising in the new $7 million recreation facility in Whitesburg.

The grand opening of the Letcher County Recreation Center is set for 11 a.m. on Nov. 19.

Summit Engineering of Pikeville designed the 43,000-square-foot center, which is located beside Dairy Queen on the former site of the old A&P/United Super grocery building.

The daily fee for using the walking track will be $ 1 a day for individuals who choose not to pay discounted walking fees of $15 a month or $150 a year.

The daily fee for using the fitness area is $5.

At the bowling alley, shoe rentals are $2. A game of bowling costs $4 for nonmembers and $3 for members . eTh six-lane bowling alley has a large projection screen with a sound system and DVD player. During cosmic bowling the lanes will light up with 60 black lights.

The batting cage will cost $1 to use.

The recreation center also has a concession stand, an arcade and golf and archery simulators. The center has free wi-fi. in Joe’s Branch.” She also wrote that she had spoken to Mayor Kincer and City Manager Todd DePriest who, she said, told her Fleming had stopped the paving. However, when asked by Fleming if it was true they told Gallion he had stopped the work, Kincer replied with an emphatic “no.”

Fleming said that in all, the court had spent $118,000 paving county roads in Jenkins and thanked Governor Steve Beshear for helping the county increase its road aid allotment. He added that the amount spent in the Jenkins area had been the largest for any specific area in the county. Kincer again expressed his thanks, accompanied by applause from the council. Fleming said there is still more work to be done on county roads in Jenkins and said he hopes the road aid allotment for the coming year will allow the court to address it.

Fleming also mentioned Mrs. Gallion’s allegation that he had kept water lines from being run to Joe’s Branch. Fleming said there had been a slight holdup as he and others worked to get funding that would allow for sewer lines to be put in at the same time water lines were laid, but said the delay had been no more than a couple of months. The funding for sewer lines didn’t come through and water lines were run to Joe’s Branch.

The matter was addressed at the January 8, 2008 meeting of the city council when Fleming responded to remarks made by Mrs. Gallion in an earlier meeting thanking Kentucky’s Fifth District Congressman Hal Rogers for getting the funding for the water lines. At that time, Fleming pointed out that Rogers had no part at all in the project and that a bill including former State Representative Howard Cornett’s request for the funding had been vetoed by then Governor Ernie Fletcher. Fleming said the final and deciding $300,000 for the water project had come from coal severance tax funds provided by the Letcher County Fiscal Court. He added that the funding for the entire project had been obtained through the hard work of then Jenkins Mayor Robert “Pud” Shubert, who worked with Nesbitt Engineering and the fiscal court to get the project done.

At that 2008 meeting, Fleming also addressed a comment Mrs. Gallion had made at another meeting criticizing him for recommending that the city wait until it had enough money to run water and sewer lines together to cut down on costs and only have to tear the road up once. Mrs. Gallion said she had read that Fleming had tried to put off the project at a fiscal court meeting in The Mountain Eagle. However, no such article appeared in The Mountain Eagle and council member Becky Terrill (Amburgey) told Mrs. Gallion she probably had confused a similar discussion in a council meeting when City Engineer Paul Nesbitt and the council had agreed that it would save a good deal of money and inconvenience to the residents of Joe’s Branch if the city could run water and sewer lines at the same time. The water lines were finally run without accompanying sewer lines because the time limit on the original grant was about to expire.

Fleming told the council he did not care who got the credit for getting water to Joe’s Branch but said he wanted to set the record straight. He said the important thing is that residents of Joe’s Branch have water. Joe’s Branch is not part of the City of Jenkins and Joe’s Branch residents have consistently voted against being annexed.

• The Jenkins Christmas Parade will be held on Saturday December 3 at 6 p.m. “snow or shine”. Chuck Anderson told the council the parade will be held regardless of weather and said “Santa” will set up at the Jenkins Fire Department and that refreshments and treat bags will be provided.

• Kincer also told the council that Jenkins resident Gina Roberts has volunteered to work with the city’s parks and asked the council to consider her for the city’s director of parks and recreation, which he said will be a voluntary position. No action could be taken since the meeting was called and the issue was not on the agenda.

• The council also discussed adding a coal mining heritage aspect to the city’s centennial celebration which will be held during 2012. Councilman Damron also mentioned the possibility of having a Beth- Elkhorn reunion.