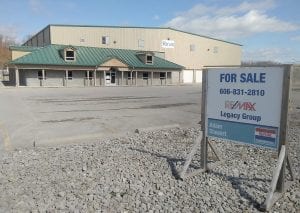 Some of the buildings at the Gateway Industrial Park at Jenkins, including the one pictured above that used to house natural gas well supplier Ferus Corp., are for sale by their owners. (Photo by Sam Adams)

Jenkins Mayor Todd Depriest, then the city manager, stood at the groundbreaking ceremony for Ferus Corp.’s liquid nitrogen plant in 2010 and listened while CEO Richard Brown told residents how much faith he had in eastern Kentucky.

For Depriest, it was déjà vu. The last time he heard those words spoken at the Gateway Industrial Park, Drillers LLC CEO Leo Kay had been cutting a ribbon on the same site for his company.

“I listened to Dick Brown give the same speech Leo gave not eight feet away,” Depriest recalled.

That was just three years earlier. Drillers closed after only two and a half years, and sold its building and land to Ferus, which had business deals with BJ Services next door.

But in 2012, barely a year after Ferus completed its $30-million plant, BJ closed, taking more than 60 jobs with it. Ferus lasted until November 2015, then it closed, too, laying off 42 employees. Now the two vacant buildings sit side by side on the nearly empty Gateway Industrial Park at Jenkins, across the road from an automated fueling station station built to service the two companies. 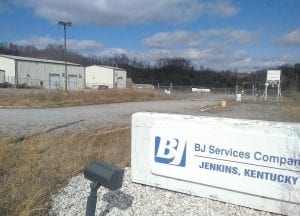 A building formerly used by natural gas well servicer BJ Services Company is for sale at the Gateway Industrial Park at Jenkins. (Photo by Sam Adams)

“When we had all those places, it was a pretty busy place,” said Julian Slone, chairman of the Appalachian Industrial Authority, the public corporation that owns the park. “Then when the price went down on natural gas, it just sucked the wind out of everything.”

Hit hard by low gas prices and the downturn in demand for eastern Kentucky coal, Letcher County’s 9.2-percent unemployment rate in December was the highest of the four counties that make up the industrial authority. Knott and Pike counties each had unemployment rates of 8.7 percent in December, and Floyd County’s rate was 8.8 percent.

Letcher County was tied with Lawrence County for the fifth highest unemployment rate in Kentucky at more than double the state rate.

This year, the budget for Letcher County’s government is $1.3 million in the red, and it’s been more than a year since the local economic development director was laid off to save money. Now the industrial park is marketed by One East Kentucky, a ninecounty consortium made up of regional banks, colleges, hospitals, telecommunications companies and American Electric Power.

Charles Sexton, president and CEO of One East Kentucky, said the organization hired consultants to survey the site and tell OEK what was needed to make it more attractive. Now, Gateway has plenty of electric power capacity, it has water, sewer, fiber optic lines and natural gas. The buildings, however, are still owned by the companies that occupied them, and the industrial authority doesn’t have the money to buy them.

“It’s always easier to do a deal if the buildings are owned locally,” he said.

But, Sexton said the site has a lot going for it, and the ownership of the buildings isn’t an insurmountable obstacle. Transportation is good, and the industrial site is close to good-paying industries that can use the skills workers here have. One East Kentucky is advising the industrial authority to “focus their energy somewhere else” besides the oil, gas and coal industries as a way to fill up the site.

That “somewhere” is automotive and aerospace. Sexton said there are 70 automobile original equipment manufacturers within 200 miles of site, 430 automotive suppliers, and 76 primary aerospace firms.

“If you look at the map, you see this big circle of all those industries, and nothing right in the middle,” Sexton said.

While aerospace may sound farfetched, Sexton said, two consultants have certified the region as “aeroready.” Those same consultants did a study of job skills of coal miners, and “our studies show those are industries folks can transition into easily.” Aerospace includes any kind of business related to airplanes, helicopters, drones, or spacecraft, including manufacturing and maintenance.

Sexton said he expects an announcement about an aircraft maintenance company coming to the region — not the Gateway site — within a month. That company, which paints and does maintenance on airplanes, needed a location with a low-traffic, regional airport.

He said he’s trying to recruit a California company that builds prototype aircraft. That company might be thought of as “high-tech,” but it needs workers skilled in computer-controlled cutting and drilling tools, and welding. The study of skills here shows unemployed miners and gas industry workers either already have those skills, or could be easily trained in them.

There are already two heavy truck manufacturing companies in the region – R.S. Godwin at Ivel and Logan Corp. at Salyersville, and Sexton said he’s using those as examples that the kind of work required by automotive manufacturers can be done here. Logan had been focused on the coal industry and was down to 15 employees at its Martin County location when the owner to decided to try building heavy truck bodies. The plan worked, and the company has now expanded to a plant in Salyersville that is five times the size of the old one.

“They’re already back up to 70 employees with plans to go to 120 within the next year,” Sexton said.

Slone, the industrial authority chairman, said he is hopeful that the upgrades in water and sewer and power at the Gateway site will attract the attention of companies that might otherwise go elsewhere.

“We’ve got what they need, we just have to get them in there to look at it,” he said.