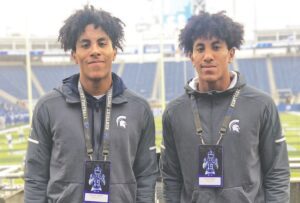 Valerie Wade needed assurances from coach Mark Stoops that he would be at UK to coach her twins Destin, left, and Keaten Wade and got it. (Twitter Photo)

As speculation continued to spread about Kentucky football coach Mark Stoops being a possible candidate at several major schools with job openings, Valerie Wade could not help worrying a bit.

Her twin sons — linebacker/ running back Keaten Wade and quarterback Destin Wade of Summit High School outside of Nashville — were both UK commits. The two Tennessee stars both had numerous offers, including from the University of Tennessee, but were sold on Stoops’s program.

Valerie Wade decided to ask Stoops directly what was happening well before UK’s season ended and news broke that Stoops had agreed to a new contract.

“I just reached out to him and told him, ‘The boys really need you as their coach.’ He quickly assured me he was going to be there. He said not to worry about it because he needed them too,” she said.

“He just came right out and told me. I was absolutely surprised with how honest he was and was really impressed with him getting back to this mom so quickly to reassure me he would be at Kentucky. It spoke highly of his character and his commitment to the program.

“He could have danced around it. He could have minced words and not be so definitive. Not every coach would put himself on the line like that.”

She said her sons never worried a lot about Stoops leaving because they were more focused on playing in the Tennessee Class 6A state championship game.

“I was more tuned to social media and message boards than them to see all the speculation and rumors,” Valerie Wade said. “People were coming up to me every day asking if Mark Stoops was leaving. It was really stressful for me because the boys were in the playoffs, and I just didn’t need any of that extra stress. When I would hear the speculation, my heart would skip a beat.

“But I am a direct person. I thought I was just going to put it out there to remind him how much we needed him and he more than reassured me he was staying.”

Once Kentucky announced Stoops had agreed to an amended contract, Valerie Wade felt even better about her sons going to Kentucky. She’s seen the upheaval in the college football coaching ranks with coaches leaving on their own, other coaches being fired or some programs going the wrong direction.

“All of that chaos just absolutely solidified that we made the right decision about Kentucky. We always felt that way, but this just validated that even more,” she said. “I understand using the leverage he had to get more for the program and his staff. I really think Kentucky is poised to explode to national prominence.”

Stoops had impressed her in September when they visited for the Florida game. Valerie Wade was surprised not only UK assistant coaches but even Stoops met with them before the game.

“We stopped at the hotel where they were. They were preparing for what at that point was the biggest game of the season and yet coach Stoops and his staff took time to chit-chat with a couple of recruits,” Valerie Wade said. “They did not have to do that. Stoops did not have to do that. He could just have hidden and got in the zone for the game and not made small talk with us. But he did and that really impressed this mother a lot.”

Her sons certainly both had memorable seasons. They are two of the three finalists for Mr. Football in Class 6A, Tennessee’s largest classification.

“I was blown away that they were both semifinalists and to have them both as finalists, what a blessing that is,” she said. “If either one wins, it will be so special.”

Keaten Wade has been invited to the All-American Bowl January 9 in San Antonio.

Kentucky junior offensive guard Kenneth Horsey not only has developed into a starter and reliable member of the Big Blue Wall, but he’s also been extraordinary with his community service. He’s been named to the Southeastern Conference Community Service Team as well as the Allstate AFCA Good Works Team. He was also a nominee for the Wuerffel Trophy presented to the top community servant in college football.

However, Horsey insists describing him as proud of what he’s done is not the right perspective.

“It is more blessed to be completely honest with you,” Horsey, who had open heart surgery at the end of his high school senior season before coming to UK, said. “All glory to God for the path He has taken me on. It has been a wild ride and it is not over.”

“So many nights I was praying for God to reveal the purpose of why this happened to me,” the UK junior said. “It was great to see things come to light.

“ I know this sounds weird but I feel blessed to have gone through this experience. It made me a better man. It brought my relationship with God closer. The boy that was going to that (operating) table is not the same man I am now. I am just blessed God gave me this platform (for community service) and I am not trying to let anyone down.”

Horsey knows his parents have worried a lot about him but they have also inspired him.

“I am a mama’s boy. That is my favorite lady,” the UK junior said. “ You would think she grew up watching football, but she wouldn’t even sit down and watch a football game until I started getting (college) offers. Now she is a football fanatic.

“Both my parents have been there with me every step of the way. Anything I wanted to do or try to do they supported me and gave me guidance. I love them for that.” s

Offensive tackle Darian Kinnard turned down a chance to start his NFL career to return to UK for his senior season. Just like he did last year, he’s had a dominant season for the Wildcats going into the January 1 Citrus Bowl against Iowa.

He is one of six semifinalists for the Outland Trophy given annually to the nation’s most outstanding interior lineman. The 6-5, 338-pound Kinnard is also a semifinalist for the Rotary Lombardi Award given to a lineman who combines on-field performance with the character and discipline of NFL Hall of Fame coach Vince Lombardi.

Kinnard, a two-time SEC Offensive Lineman of the Week this season, has already accepted an invitation to the Reese’s Senior Bowl where he will be able to showcase his skills to a bevy of NFL scouts.

“When he gets his hands on you, it is over. He projects as a day one starting tackle (in the NFL) and there will be some thought about moving him to guard,” Jim Nagy, director of the Reese’s Senior Bowl, said.

“He will play tackle and probably move inside and play some guard (at the Senior Bowl). I think he will be in that small group of linemen we talk about at the top of this year’s draft.”

Kinnard has consistently graded high in both run and pass blocking — something he’s had a chance to show that he can do well this season because of UK’s more balanced offense under new coordinator Liam Coen. s

Quote of the Week: “They’re just as physically imposing as Gonzaga all across the floor. They’re on Gonzaga’s level. They’ve got a fantastic team. They will do a lot of damage this year,” Central Michigan coach Tony Barbee after an 85-57 loss at Kentucky.

Quote of the Week 2: “I had to go see my mentor and my friend on his birthday! Sounds like I am far from the only one to come by too. Bunch of friends, family and former players! Thank you to everyone who has sent cards and letters. He has really appreciated them,” UK coach John Calipari on former UK coach Joe B. Hall’s 93rd birthday.

Quote of the Week 3: “We’ve done that before we knew anything about this thing called the (transfer) portal. That’s just the way we’ve built our relationships. We’re that way, give them a handshake, and wish them the best,” Mark Stoops on maintaining relationships with recruits who do not pick UK.