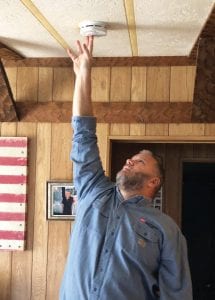 A Kentucky Power Company employee installed a free smoke alarm at a home in Letcher County on Martin Luther King Day of Service.

The smoke alarm install is the second to be funded by a $40,000 grant from the American Electric Power Foundation awarded in 2019. A third installation is planned for Pike County later this year. The Red Cross partners with community volunteer fire departments to canvass targeted low-income areas and provide smoke detectors to those in need.

One of the best ways to prepare for a home fire is to have working smoke detectors. They can reduce the risk of dying in a home fire by nearly 50 percent, according to the Red Cross.

“The Red Cross responds to more than 300 home fires in eastern Kentucky every year,” said Kentucky Power President Brett Mattison. “This partnership is a good fit for Kentucky Power because too many home fires in our region can be traced to electrical issues. One fire is one too many. And we know having working smoke detectors in the home can provide residents valuable time to escape. Homes will be made safer and lives will be saved.”

“According to the U.S. Fire Administration, house fires claimed the lives of 60 Kentuckians just last year,” Sen. Turner said. “In honor of Martin Luther King Jr., I hope this day of service helps bring out many volunteers to serve our community and protect our neighbors in the case of a fire. A special thanks to Red Cross, Kentucky Power, and all the volunteers taking part in this event.”

The AEP Foundation is funded by AEP and its operating units, including Kentucky Power. AEP Foundation grants are not tracked for recovery from customers through rates. The Foundation focuses grants on improving lives through education in science, technology, engineering, math and the environment and by meeting basic needs for emergency shelter, affordable housing and the elimination of hunger in the communities it serves. Ashland–based Kentucky Power serves 166,000 customers.